The Riyadh Declaration (the final communiqué of the Arab-Islamic-American leaders’ summit), reflected convenience at the frank and fruitful dialogue atmosphere that prevailed, during the summit, hosted by Saudi Arabia, in the presence of as many as 55 leaders and representatives of Arab, Islamic countries and the US, in addition to the outcomes reached upon conformity of points of view and opinions and the move forward, in regard of various current regional as well as international issues, asserting that the summit constitutes a historic turning point, in the relationship between the Arab-Islamic world and the US, as it shall furnish wider prospects for the future. 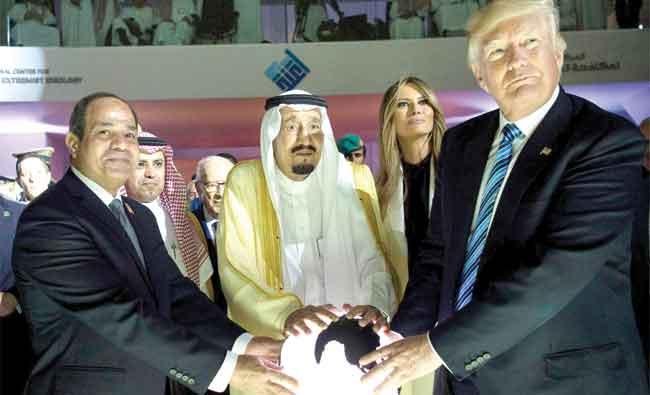 According to a statement, released following the conclusion of the summit, the Riyadh Declaration reads as follows:

“In line with the invitation of Saudi King Salman, leaders and representatives of as many as 55 Arab and Islamic countries, in addition to the US held a summit in Riyadh.

The participants expressed gratitude and appreciation of King Salman, for inviting them to hold such a historic summit.

They also valued the similarly historic visit made by the US President to Saudi Arabia, participating in the summit and his endeavors to contribute to the good of region and its peoples’ interests.

The leaders expressed relaxation at the atmosphere of the frank and fruitful dialogue that prevailed, during the summit, outcomes reached, based on conformity in the points of view and opinions and the moving ahead before various current regional as well as international issues, stressing that this summit constitutes a historic transformation, in regard of the Arab-Islamic relationship with the US, as it would open the way for wider prospects for their mutual future ties.

First: The close partnership between the leaders of Arab and Islamic countries and the US leader to confront extremism, terrorism, achieving peace, stability and development, on regional as well as international stages.

The leaders agreed upon means to enhance cooperation and measurements taken to consolidate relations and joint action and they vowed to continue close coordination between the Arab and Islamic countries, on one hand, and the US, on the other, toward issues of mutual interest to bolster partnership among them and to share experience, in the domain of development.

For its part, the US welcomed the willingness of Arab and Islamic countries, in promoting ways of cooperation to unify opinions and stances toward various issues, topped by doubling jointly exerted efforts to combat extremism and terrorism.

Second: To promote coexistence and constructive tolerance between different countries, religions and cultures,

The leaders explained their countries’ rejection of any attempt to draw a link between terrorism and any religion, culture or race, affirming their determination to protect and promote a culture of tolerance, coexistence and constructive cooperation among different countries, religions and cultures.

Third: Confronting the sectarian agendas and interference in other countries affairs:

The leaders underscored the importance of the current cooperation between countries, the relations based on the principles of good neighborhood, non-interference in the domestic affairs of other countries and respect of their independence, sovereignty and integrity of territories whereas:

The leaders stressed the importance of enhancing joint action to protect regional waters, combating piracy to maintain security and stability and avoiding disruption of ports and sea lanes of ships, which negatively affected the commercial movement and economic growth of the countries. The countries agreed to support joint work to develop capabilities to confront piracy, combat organized crime and drug trafficking across borders land, sea and air.

The leaders noted the importance of following-up the programs and activities in areas of partnership between the Arab and Islamic worlds and the US.

The leaders stressed that these efforts must be continuous, and: