Saudi Arabia – (warsoor) – President Donald Trump urged Arab and Islamic leaders on Sunday to unite and do their share to defeat Islamist extremists, making an impassioned plea to “drive out” terrorists while toning down his own harsh rhetoric about Muslims.

Trump singled out Iran as a key source of funding and support for militant groups. His words aligned with the views of his Saudi Arabian hosts and sent a tough message to Tehran the day after Hassan Rouhani won a second term as Iran’s president. 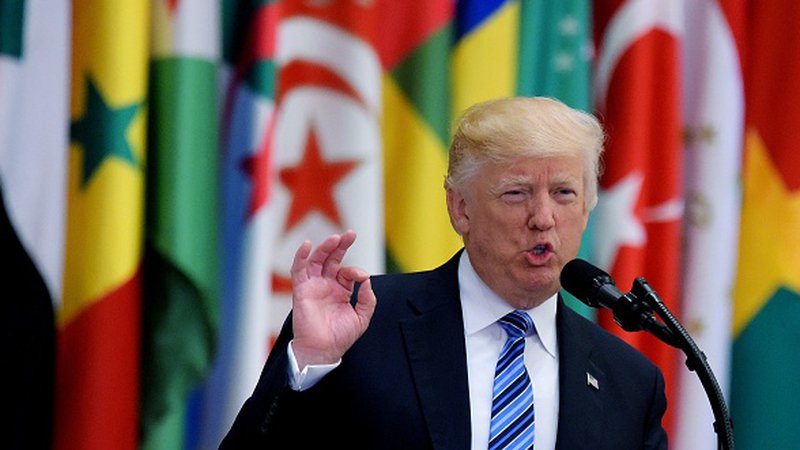 The U.S. president did not use his signature term “radical Islamic terrorism” in the speech, a signal that he heeded advice to employ a more moderate tone in the region after using the phrase repeatedly as a presidential candidate.

“Terrorism has spread all across the world. But the path to peace begins right here, on this ancient soil, in this sacred land,” Trump told leaders from about 50 Muslim-majority countries representing more than a billion people.

The president’s first speech abroad provided an opportunity to show his strength and resolve, in contrast to his struggle to contain a mushrooming scandal at home after his firing of former FBI Director James Comey nearly two weeks ago. 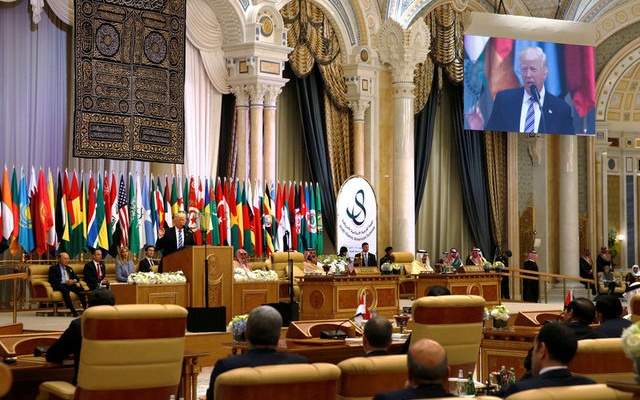 He portrayed the conflict as one between good and evil, not between civilizations, and made clear in a forceful tone that Washington would partner with the Middle East but expected more action in return.

“There is still much work to be done. That means honestly confronting the crisis of Islamic extremism, and the Islamists, and Islamic terror of all kinds,” he said in his speech.

The advance excerpts of the speech had him saying “Islamist extremism.” A White House official blamed Trump’s fatigue for the switch. “Just an exhausted guy,” she told reporters.

The term “Islamist extremism” refers to Islamism as a political movement rather than Islam as a religion, a distinction that the Republican president had frequently criticized the administration of his Democratic predecessor, Barack Obama, for making.

As a candidate, Trump proposed temporarily banning Muslims from entering the United States. In office, he ordered temporary bans on people from several Muslim-majority countries, which have been blocked by courts that ruled they were discriminatory.

The speech in a gilded hall bedecked with chandeliers is part of an effort to redefine his relationship with the Muslim world. Trump’s “America first” philosophy helped him win the 2016 election and has rattled allies who depend on U.S. support for their defense.

Trump received a warm welcome from Arab leaders, who set aside his campaign rhetoric and focused on his desire to crack down on Iran’s influence in the region, a commitment they found wanting in Obama.

“For decades, Iran has fueled the fires of sectarian conflict and terror,” Trump said. “It is a government that speaks openly of mass murder, vowing the destruction of Israel, death to America, and ruin for many leaders and nations in this very room.”

Trump did not make overt mentions of human rights abuses in Saudi Arabia or the other Gulf nations in his speech. White House officials has said he did not want to lecture, something they believe Obama did, unsuccessfully.

Iranian Foreign Minister Mohammad Javad Zarif fired back at Trump in a tweet that Trump had attacked Iran in “that bastion of democracy & moderation” of Saudi Arabia and suggested he had “milked” his hosts for hundreds of billions of dollars in business deals.

Introducing Trump, Saudi King Salman described their mutual foe Iran as the source of terrorism they must confront together.

“Our responsibility before God and our people and the whole world is to stand united to fight the forces of evil and extremism wherever they are … The Iranian regime represents the tip of the spear of global terrorism,” the king said.

Iran is a Shi’ite Muslim country. The groups the United States has been fighting in Afghanistan, Iraq and elsewhere since the Sept. 11, 2001, attacks on Washington and New York are mostly Sunni Muslims, and enemies of Iran. Iranian-backed militia are also fighting Islamic State militants in Iraq.

The United States and Gulf Arab countries announced an agreement to coordinate efforts against the financing of terrorist groups.

Trump’s welcome in the region was put on display during a series of individual meetings with Arab leaders.

He praised Egyptian President Abdel Fattah al-Sisi, telling him: “You have done a tremendous job under trying circumstances.” The Obama administration had a difficult relationship with Sisi, who came to power after leading a military coup in 2013 during which hundreds of demonstrators were killed, and has since jailed thousands of opponents.

Trump promised to schedule a trip to Egypt soon, and he singled out the Egyptian’s choice of footwear, a pair of shiny black shoes. “Love your shoes. Boy, those shoes,” he said.

To Bahrain’s King Hamad bin Isa al-Khalifa, Trump declared that the two nations had a lot in common and “there won’t be strain with this administration.”

The king lauded the relationship and said it had led to “great stability in the region and prosperity.” Bahrain is home to the U.S. fleet in the Middle East. Its Sunni Muslim royal family rules over a majority Shi’ite population and was occasionally rebuked by the Obama administration for harsh treatment of opponents.

Trump’s Riyadh visit kicked off his first presidential trip abroad, with Saudi Arabia the first stop on a nine-day journey through the Middle East and Europe.

Soon after Trump embarked on his trip on Friday, he was hit with more accusations that, with Comey’s firing on May 9, he was trying to squelch a federal investigation into his campaign’s ties with Russia last year.