Minneapolis – (warsoor) – A 4-year-old Somali girl whose long-awaited reunion with her mother was put on hold this week due to President Donald Trump’s travel ban is now with her family in Minnesota.

Mushkaad Abdi gripped a doll and the hand of her mother, Samira Dahir, who wiped away tears Friday as she spoke to reporters about the reunion.

“I’m very happy today that my daughter, Mushkaad, is now home after painful years,” said Dahir, 32. “I would like to thank you everyone who helped me … I’m so happy. That’s why I’m crying.” 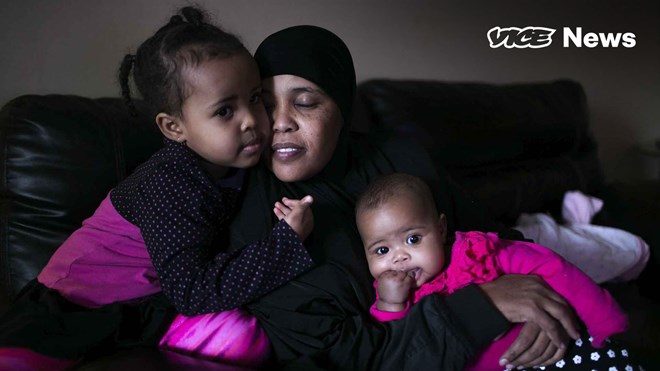 Dahir came to the U.S. in 2013 with her two older daughters. Prior to her arrival but after she was approved to enter the U.S. as a refugee, she gave birth to Mushkaad, her youngest daughter. Dahir was told she would have to choose to start the refugee application process all over again with her whole family, or leave the youngest girl behind and bring her to the U.S. later, said Maureen Warren, chief family services officer for Lutheran Social Service of Minnesota.

Dahir left Mushkaad with a friend in Uganda and has worked for years to bring her to Minnesota. The situation became more urgent months ago when the friend was no longer able to care for the girl. Dahir told her naturalization teacher about the problem, and the teacher contacted U.S. Sen. Al Franken’s office.

Mushkaad was scheduled to arrive on Jan. 31, but her trip was canceled by Trump’s executive order banning refugees from certain countries. Franken and Klobuchar intervened and pressed Department of Homeland Security Secretary John Kelly to clear the girl’s travel.

“It’s been heart-wrenching for Samira and her two older daughters, who have waited to be reunited with Mushkaad since she was an infant. I’m very pleased that — after far too long of a separation — this Minnesota family is now together,” Franken said in a statement. “This case proves that President Trump’s Executive Order was poorly thought out, poorly executed, and above all wrong for Minnesota and the nation.”

Klobuchar added that the executive order caused chaos and its impact was felt by Minnesota families and businesses.

“I am so glad that Mushkaad is now safe at home in the United States with her mother, Samira, and her two sisters,” she said. “However, we know that Mushkaad is not the only child who was waiting to be reunited with their family and caught up in the aftermath of this order. I will continue to advocate to help families in the state.”

Dahir and her older daughters are lawful permanent residents of the U.S. and Mushkaad is now in the U.S. as a refugee. She will be allowed to become a legal permanent resident in a year. But when Dahir becomes a U.S. citizen in the next year, her daughters will also become citizens, said Benjamin Casper Sanchez, director of the Center for New Americans at the University of Minnesota Law School.