Sweden striker Zlatan Ibrahimovic has announced he will retire from international football after Euro 2016.

His side face Belgium in their last Group E game on Wednesday, which could now be his final match for the country.

He said: “I am very proud of what I have achieved and will always bring the Swedish flag with me.” 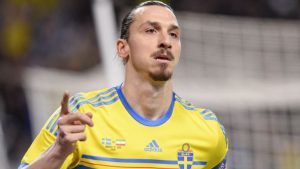 Manchester United have been strongly linked with the 34-year-old, who became a free agent after leaving French champions Paris St-Germain this summer.

Ibrahimovic’s 62 international goals is a national record, whilst an appearance against Belgium would leave him with 116 caps, 32 behind Anders Svensson’s 148.

He had been expected to represent his country at the Rio Olympics in August.

Sweden will exit the competition if they fail to beat Belgium at the Stade de Nice on Wednesday (20:00 BST) – a draw would leave them with two points, which will not be enough to warrant a best third-placed spot.