Two U.S. defense officials, speaking on condition of anonymity, said the strikes were carried out late on Wednesday 28 miles (45 km) southwest of Sirte against two camps.

They were done in cooperation with Libya’s U.N.-backed Government of National Accord (GNA) and no women or children were in the camps, the officials said.

One of the officials said initial reports showed dozens of militants were killed in the strikes with more than 100 precision guided munitions dropped. 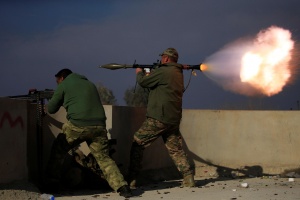 The loss of Sirte was a major blow for Islamic State, leaving the group without any territory in Libya, but it retains an active presence in parts of the vast country.

Libyan officials say hundreds of militants may have escaped before the battle in Sirte or during its early stages, and local Islamic State leaders have spoken of trying to regroup outside the city.

“The ISIL terrorists targeted included individuals who fled to the remote desert camps from Sirte in order to reorganize, and they posed a security threat to Libya, the region, and U.S. national interests,” Cook said, using an acronym for Islamic State.

A statement from the GNA in Tripoli said the strikes were carried out against “several Islamic State gatherings in desert areas near Sirte, which were completely destroyed”.

“These air strikes are preemptive steps to foil attempts by the Islamic State terrorist organization to attack Sirte and others areas again,” it said.

The GNA has received strong backing from the outgoing U.S. administration but has struggled to win support inside Libya or reverse the chaos that developed after rebels overthrew Muammar Gaddafi in 2011 with help from NATO.

The jihadist group took over Sirte in early 2015, turning it into its most important base outside the Middle East and attracting large numbers of foreign fighters into the city. It imposed its ultra-hardline rule on residents and extended its control along about 250 km (155 miles) of Libya’s Mediterranean coastline.