Nigeria – (warsoor) –  A botched military air strike on a refugee camp in northeast Nigeria which is estimated to have killed at least 76 people and injured many more must be fully investigated, a United Nations expert said on Thursday.

The Nigerian government said the bombing on Tuesday of the camp in Rann in Borno state, the heart of Boko Haram’s seven-year bid to create an Islamic caliphate, was aimed at the militants and called it a “regrettable operational mistake”.

The air force said civilians were accidentally killed and wounded in the attack, but neither it nor the government has provided an official casualty figure. 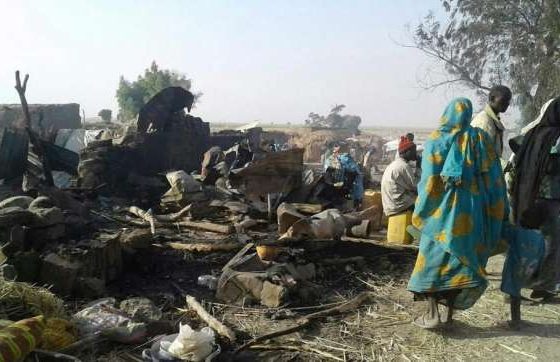 The U.N. special rapporteur on the human rights of internally displaced persons, Cecilia Jimenez-Damary, said the safety of those forced to flee their homes by Boko Haram’s insurgency must be guaranteed.

“This tragedy should never have happened and brings into stark focus the perilous situation that many internally displaced persons continue to experience,” Jimenez-Damary said in a statement.

She called for a full investigation into the attack and an urgent response to ensure the safety of the displaced and other communities in the area, including evacuation if necessary.

The International Red Cross and Red Crescent Movement said on Wednesday that at least 76 people were killed in the attack, including six Nigeria Red Cross members, and that more than 100 people were wounded.

But several aid agencies predicted the death toll was set to rise with dozens of people being airlifted to Maiduguri, the capital of Borno state, and treated for serious injuries.

Doctors and medical supplies have also been sent to Rann, which is estimated to house up to 40,000 people, said the U.N. Office for the Coordination of Humanitarian Affairs.

The ICRC vowed on Tuesday to continue delivering aid to people in northeast Nigeria despite the attack.

Boko Haram has stepped up attacks in the past few weeks as the end of the rainy season allow movements in the bush amid an offensive against the Islamist militants by Nigeria’s army.

The group’s insurgency has killed more than 15,000 people and forced some two million to flee their homes. Yet the group has been pushed out from most of the territory it held in 2015 by the Nigerian military, with help from neighboring countries.