Barrow, the winner of a disputed December 1 vote, was inaugurated on Thursday in a hastily-arranged ceremony at Gambia’s embassy in the Senegalese capital, Dakar.

“This is a day no Gambian will ever forget in a lifetime,” Barrow said in a speech immediately after being sworn in.

In Dakar, the small embassy room held about 40 people, including Senegal’s prime minister and the head of Gambia’s electoral commission. 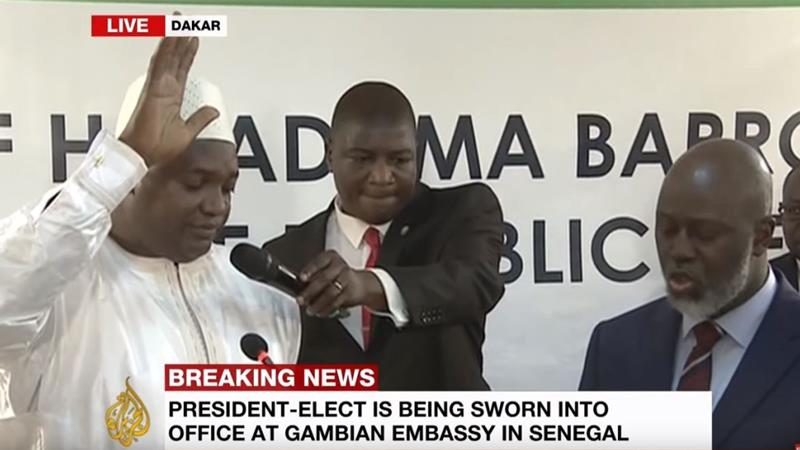 Also at the event were officials from ECOWAS, West Africa’s regional bloc, which is threatening a military intervention to force Jammeh to leave office.

In his inauguration speech, Barrow called ECOWAS, the African Union and United Nations to “support the government and people of the Gambia in enforcing their will”.

Earlier this week, Jammeh, who came to power in a 1994 coup, declared a national state of emergency, while the parliament has extended his term in office by 90 days.

Hundreds of regional troops have deployed to the Gambian border to back Barrow in a showdown with Jammeh.

The UN Security Council was set to vote later on Thursday on a draft resolution endorsing a military intervention by ECOWAS members to remove Jammeh.

Senegal’s army had said on Wednesday it would be ready to cross into its smaller neighbour, which it surrounds, from midnight.

“A military operation [is under way] with troops also from Ghana, Nigeria, Togo, Mali – they are all at the Senegale border and presenting a united front,” Al Jazeera’s Nicolas Haque, reporting from Dakar, said.

A senior Nigerian military source told Reuters news agency that regional forces would only act once Barrow had been sworn in.

“Eight cabinet members have resigned saying they no longer stand with Jammeh. But despite all these defections, Jammeh is still not willing to concede defeat.”

A former coup leader who has ruled the small West African country since 1994, Jammeh has resisted strong international pressure for him to step down.