He told a rally in Indiana that China was responsible for “the greatest theft in the history of the world”.

Mr Trump, a billionaire businessman, has long accused China of manipulating its currency to make its exports more competitive globally. 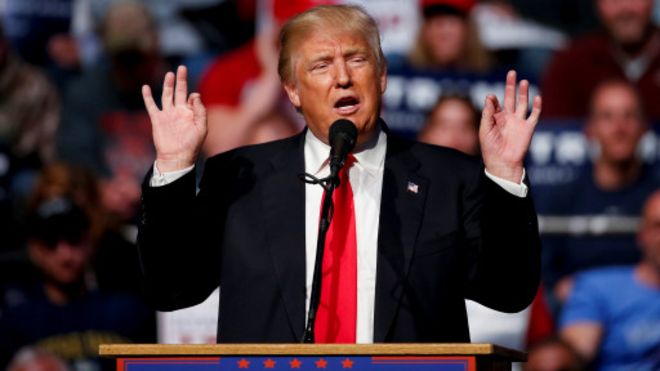 This, he says, has badly damaged US businesses and workers.

“We can’t continue to allow China to rape our country, and that’s what we’re doing,” he told the campaign rally on Sunday.

“We’re going to turn it around, and we have the cards, don’t forget it,” he added. “We have a lot of power with China.”

Mr Trump, in his campaign manifesto, pledges to “cut a better deal with China that helps American businesses and workers compete”.

He sets out four goals that include immediately declaring China “a currency manipulator” and putting “an end to China’s illegal export subsidies and lax labour and environmental standards”.

Figures from the US government show the annual trade deficit with China was at an all-time high of $365.7bn (£250.1bn) last year.

There was no immediate response from Beijing to Mr Trump’s comments, but he is seen by many in China as an inspiration rather than an antagonist, says the BBC’s Vincent Ni.