South Africa – (warsoor) – A South African judge ruled on Wednesday that a report over alleged influence peddling in government should be released, after President Jacob Zuma dropped a court bid to delay its publication and thousands marched against him.

Police fired stun grenades and used water cannon to disperse demonstrators who had marched to the Union Buildings, the seat of government where Zuma’s offices are located in the capital Pretoria. Outside the court deliberating whether to release the report, protesters carried “Zuma must go” placards.

The report by the Public Protector, a constitutionally mandated anti-graft official, looks into allegations of corruption that have brought on the biggest crisis of Zuma’s presidency, costing him support within the ruling party.

Zuma denies providing special favors for wealthy friends, including three brothers who also deny wrongdoing. The report’s publication had been halted on Oct. 14 after Zuma appealed to the High Court to block it.

The affair has rattled markets in Africa’s most industrialized economy, which faces the risk of ratings downgrades later this year. Divisions within the African National Congress (ANC) have widened since the ruling party suffered its worst-ever local election results in August.

The rand rose by 2 percent to the dollar and bonds firmed. Analysts said allowing the report to be released was an indication the country still had strong institutions.

“The public protector is ordered to publish the report forthwith and by no later than 1700 (1100 ET) on 2 November, 2016,” Judge Dunstan Mlambo said to applause in court.

Zuma withdrew his court bid in the interests of justice, the Presidency said in a statement. It also said Zuma would consider “the contents of the report in order to ascertain whether it should be a subject of a court challenge.”

Zuma’s lawyer, Anthea Platt, had earlier told the court she had been instructed to withdraw the application to delay publication and offer to pay the costs for the hearing.

Protesters also demanded that state prosecutor Shaun Abrahams be removed from office. Abrahams had pressed charges of fraud against Finance Minister Pravin Gordhan, but then dropped them on Monday after popular support for him from the worlds of politics and business. 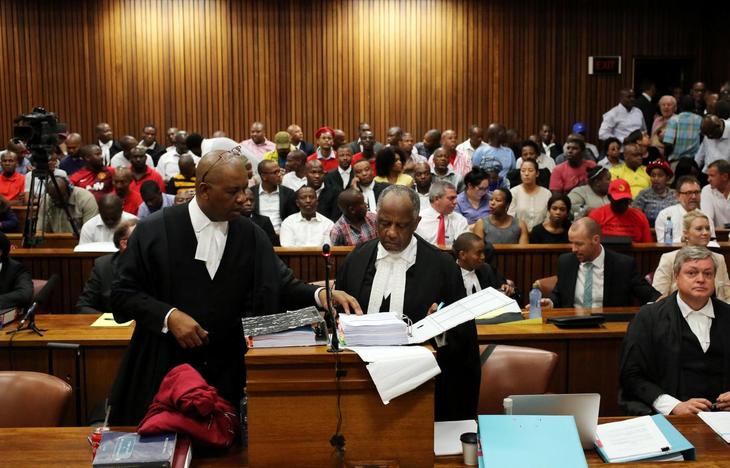 Supporters of Gordhan and sympathetic financial analysts say the charges against him could have been a ploy by Zuma and his allies to discredit Gordhan for standing in the way of their securing access to government contracts. The president has denied that he is in conflict with Gordhan.

In a sign of the country’s establishment turning sharply against Zuma, the Nelson Mandela Foundation, a charity founded by South Africa’s first black president, blamed Zuma on Tuesday for the “wheels coming off” South Africa.

Since taking office in 2009, Zuma, 74, has survived several corruption scandals with the backing of top echelons of the ANC. But near record unemployment has exacerbated discontent with his government, which also failed to end weeks of often violent student demonstrations over the cost of university education.

Jay Jacobs, 40, a protester outside the court who works in the security industry, said: “We will not leave Pretoria until Zuma goes. He must take the Guptas with him to jail.”

Brothers Ajay, Atul and Rajesh Gupta, who are close friends of Zuma and run businesses ranging from media to mining, are the subject of the report by the then public protector on allegations that they influenced the appointment of ministers.

Zuma has denied granting them undue influence and they have denied seeking it.

“The publication of the report will probably certainly embarrass him and will embarrass members of the cabinet,” Daniel Silke, a director at Political Futures Consultancy, said.

“While we may not see immediate action from the president, I think the ANC will now begin a process which will result in President Zuma’s earlier departure from office. The pressure is going to be felt after 5pm tonight.”

However, some predicted that Zuma could still delay a reckoning. Political analyst Gary van Staden of NKC African Economics said: “We have to bear in mind he probably has a few other legal tricks up his sleeve, like he wants to review it or disputes it.”

Outside the court, opposition leaders said Zuma, who has shown no signs of stepping down before his second and final term as president is up in 2019, should leave office now.

“We don’t want Zuma, he has no credibility,” said Julius Malema, leader of the radical leftist party Economic Freedom Fighters who called for Wednesday’s marches as a show of force against Zuma.

Paul Mashatile, ANC chairman for Gauteng province which includes Pretoria and the economic hub Johannesburg, said his group would take part in the marches, even without the blessing of the national party.

“I do not have the mandate to say the president must step down, but I can say we are against all the wrong things that are happening, including corruption,” he told eNCA television.

He said the party had to change after its August hammering in municipal polls, its worst electoral losses since Mandela’s historic victory in the first post-apartheid election in 1994.

In March, the Constitutional Court ordered Zuma to repay some of $16 million spent on enhancing his Nkandla home in rural KwaZulu-Natal province. Zuma, who weathered a motion of no-confidence in parliament over the cost of the renovations, has since paid back more than $500,000 as required by the court.