USA – (warsoor) – A gunman with a U.S. military identification opened fire at a baggage carousel at Fort Lauderdale-Hollywood International Airport on Friday, killing five people before being taken into custody, officials and witnesses said.

Five people died and eight were wounded, Broward County Sheriff Scott Israel told reporters at the airport, where air traffic was shut down.

The gunman had arrived on a flight with a checked gun in his bag, Broward County Commissioner Chip LaMarca said on Twitter. The shooter claimed his bag and went to the bathroom to load the gun before coming out and firing, LaMarca said. 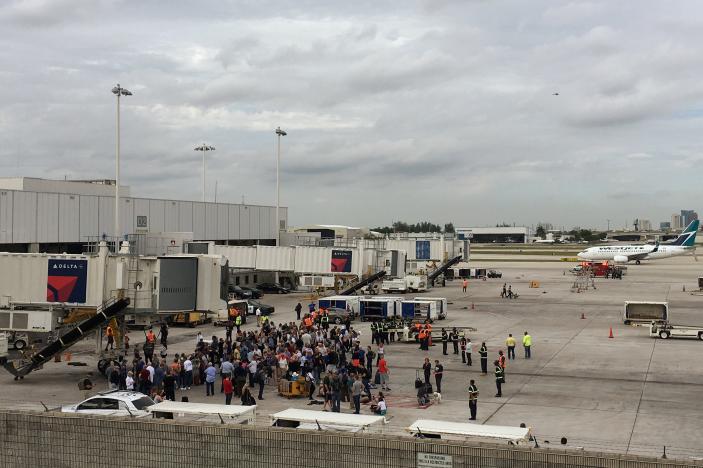 Cellphone video posted on social media showed victims on the floor next to a carousel, with people on their knees attempting to provide aid. At least two victims had pools of blood from apparent head wounds.

The shooter was unharmed as law enforcement officers never fired a shot, Israel said, adding it was too early to assign a motive.

“At this point, it looks like he acted alone,” Israel said.

Nonetheless, he said “this scene is considered fluid and active” as police searched the rest of the airport.

The shooter was identified as Esteban Santiago, 26, and had a U.S. military identification, according to a spokesman for U.S. Senator Bill Nelson of Florida, who spoke with officials at the Transportation Security Administration.

The shooter, who wore a “Star Wars” T-shirt, said nothing as he fired, witnesses told MSNBC. He appeared to use a 9 mm handgun, which he tossed aside upon running out of ammunition, surrendering to police, MSNBC reported.

The Florida attack was the latest in a series of mass shootings that have plagued the United States in recent years, some inspired by militants with an extreme view of Islam, others carried out by loners or the mentally disturbed who have easy access to weapons under U.S. gun laws.

About 90 minutes after the attack, panic broke out anew with passengers and police running frantically about at a separate terminal, but Israel said there were no other reports of shots being fired.

John Schlicher, who told MSNBC he saw the attack, described the shooter as a slender man who was “directly firing at us” while passengers waited for their bags.

“I put my head down and prayed,” Schlicher said, adding that his wife gave first aid to someone who had been shot in the head. His mother-in-law used her sweater to tend to another victim but it turned out that person was already dead, he said.

Mark Lea, another eyewitness, told MSNBC “there was no rhyme or reason to it.”

“He didn’t say anything, he was quiet the whole time, he didn’t yell anything,” Lea said.

Nearly two months ago a former Southwest Airlines worker killed an employee of the company at Oklahoma City’s airport in what police called a premeditated act.

One of the most shocking was in 2012, when a man entered an elementary school in Newtown, Connecticut, and shot dead 20 first-graders and six adults.

Attackers have exploited security officials’ focus on preventing attacks on airplanes rather than inside airports. In Western Europe and the United States, terminals are easily accessible public spaces.

But at Israel’s Ben Gurion Airport, widely seen as a model for security, private companies trained by the national security agency use bomb-detectors, profile passengers and question travelers under the watch of police at the airport’s entrance.