Gareth Bale made a goalscoring return from an ankle injury as he scored Real Madrid’s second in a comfortable 2-0 win over Espanyol on Saturday.

Los Periquitos had not won at the Bernabeu since 1996, but looked organised in the early stages of the game, though they went behind when Alvaro Morata headed Isco’s cross past David Lopez in the 33rd minute.

Morata’s goal put Real on top and they found themselves in an utterly dominant position, though they left it late to kill off the game – despite 13 corners being awarded their way – when Bale picked up Isco’s pass on the left and fired home to confirm the three points.

The win sees Real stay at the La Liga summit, four points ahead of closest rivals Barcelona, with a game in hand. 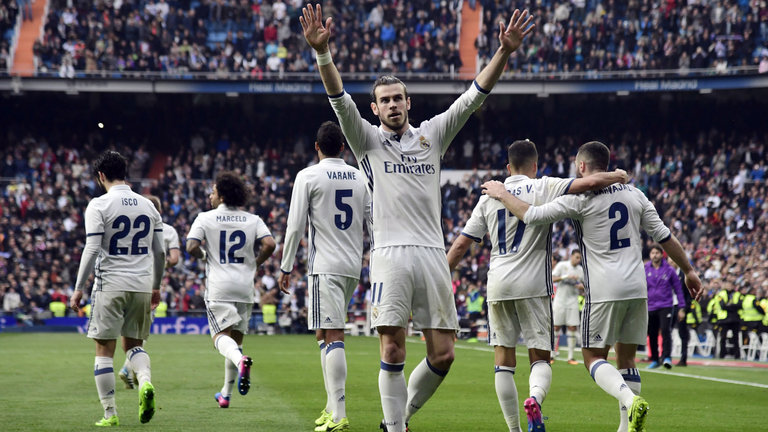 The game got underway with a relatively low tempo, both sides enjoying large swathes of possession before the first opening almost 15 minutes into the game.

After running Oscar Duarte ragged at the near post, Morata bore down on goal; only the late intervention of Diego Reyes ensured the chance of an early opener from Real went begging.

It proved to be the catalyst for Madrid to move up the gears, though and although they momentarily went down to 10 when Mateo Kovacic felt the full force of Pape Diop’s head, they had the ball in the net just after the half hour through Cristiano Ronaldo, whose finish was swiftly chalked off for offside.

Just a minute later though, Morata headed the hosts into the lead when, unchallenged by David Lopez, he rose to head Isco’s cross from the right past former Real stopper Diego Lopez.

Real went close to extending their lead in the second half but shots from Toni Kroos and Casemiro flew over the bar, while a subdued Ronaldo saw a free-kick blocked from an ideal position.

Bale made his return to action after 88 days out with an ankle injury in the 71st minute when he came on for Morata and the Welshman wrapped up the victory seven minutes from time.

Isco’s intuitive pass into space on the left was picked up by Bale, who raced towards goal before his shot travelled across Diego Lopez and into the far corner of the net;

Ronaldo had two penalty appeals – correctly – waved away by referee Undiano Mallenco but though he went without a goal, Real recorded their fourth straight La Liga win.