Hargeisa – (warsoor) – Somaliland President issued a presidential decree heading to speaker of parliament demanded parliament to suport unanimously the decision made by the president, separated presidential and the parliament elections. 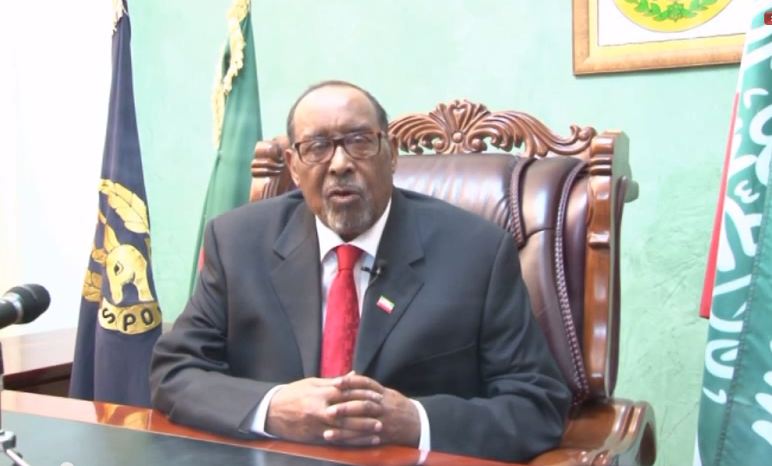 Hereis the press release from the presidential press and spokesman’s office:

To:    Speaker of the House of Representatives

With reference to the decision by the Somaliland political parties to bestow upon me their full confidence to make a decision on the issue of parliamentary seats allocation, following their inability to reach a unanimous decision,

After taking into consideration the report by the Academy of Peace and Development (APD), and Somaliland Non State Actors Forum (SONSAF) which clearly showed the demand of the regions for a decision on fairer allocation of the parliamentary seats before the election date. The report indicated that none of the regions were satisfied with the present allocation system and the need for a solution,

Having seen the reports of the Chairman of the House of Representatives, and those of the subcommittee for the Internal Affairs of the House which demonstrated sufficiently the dissatisfaction of the regions across the country with the current parliamentary seats allocation and the need for a national decision,

Having seen part 1 and part 2 of Article 8, Article 22 and Article of 90 of the constitution of the Republic of Somaliland,

Taking into consideration the decision of the Constitutional court of the Republic of Somaliland concerning the election of the House of Representatives in 2005, according to which the allocation was meant for only that time, and subsequent allocations would be based on census,

Having acknowledged the grievances of the traditional elders and the politicians of Awdal Region regarding the region’s share in the current parliament,

Having acknowledged the grievances of the traditional elders, and the politicians of Sool, Eastern Sanaag and Buhoodle regions regarding dissatisfaction with power sharing in government and current allocation of seats in parliament,

Having satisfied ourselves of the discontentment expressed by women and minority groups regarding their share of the seats in the current parliament which is an issue that needs special attention,

Being aware of the fact that holding elections under the previous format may hamper the national reconciliation assembly which we are organizing for the traditional leaders and the intellectuals of Sool, Eastern Sanaag and Buuhoodle regions planned to take place in Burao on 25/10/2016,

Having realized fully the short time left before the election date of the members of House Parliament, and the importance of achieving a satisfactory allocation structure based on law that meets current concerns, and mindful that the outstanding issues cannot be tackled within the 7 months left as they need ample time to resolve them,

Having realized that if we hold a parliamentary election under the current allocation framework or on the basis of another unsatisfactory arrangement hastily devised which may lead to confrontation that could spoil the presidential election and lead to the postponement of both elections,

Having determined the importance attached to an equitable regional representation in parliament thus eliminate the very justifiable complains and in the process maintain prevalent peace and stability in the country, a process impossible to effect in the short time of seven months remaining to holding elections as scheduled on28th  March 2017,

In lieu of the essence involved in establishing fully approved regional seats allocation thence attain desired equitable representation, which haste might again impinge negatively, to the detriment of the country’s democratization process, it is my view that caution and broad based national consultations must be held,

While promoting my personal desire for continued and apt democratization of the country through holding of free, fair and transparent elections as well timely and acceptable to all citizens,
In respect to the decision reached by elders of Guurti (the upper chamber of parliament), that elections for both the presidency and legislature will be held simultaneously on 28th March 2017, a decision legalized by a subsequent ruling by the Somaliland Constitutional Court,

Having perceived that lengthily discussions by legislators have failed to amend election laws in which mechanism for agreeable regional representation in the House of Representatives both timely and consensually, subsequently differing decision on equitable seats allocations to my office,
Empirically aware that parliamentary elections are technically not feasible as currently scheduled due to the contested seats allocations and subsequent repercussions if not resolved amicably and to the satisfaction of all citizens,

Finally, in pursuit of sustaining common peace and security as well as the very being of Somaliland as a country where all are equal and having regard to my determination to leave upon expiry of my tenure, a cohesive and peaceful country, I Ahmed Mohamed Silanyo, the President of the Republic of Somaliland hereby decree:

1)   That the Parliamentary elections are not feasible within the current regionally inequitable seats allocation.

2)   To hold review and subsequent regionally equitable allocation of Parliamentary seats as pertains to Awdal, Sool, East Sanaag and Buhoodle regions that are currently under represented.

3)   To establish a National Committee with the mandate to thorough revision of the outstanding issue of contested seat allocations for the regions and recommend future regionally based seats allocation structure in the House of Representatives that are in tandem with laws and constitution.

To this effect, I urge honourable members of the House of Representatives to not only provide unanimous support but expedite approval of this decree.
Finally, it is imperative to mention that legislature approval which is anticipated expeditiously shall not translate to implementation for it requires my submission to the Constitutional Court to legalize before dissemination.

The President of Republic of Somaliland”.