Kenya – (warsoor) – Visiting Secretary of State John Kerry, who is in the country on a two-day tour, said an additional Sh2.5 billion would be released to support electoral reforms ahead of next year’s general elections.

“The US government will offer an assistance of $170 million for refugees, returnees and for the humanitarian aid in Kenya,” said Mr Kerry. 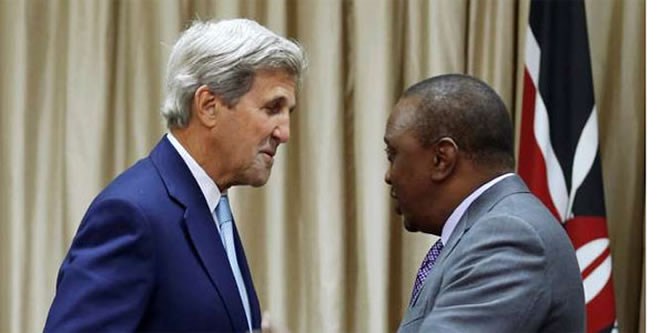 On electoral reforms, Mr Kerry urged political parties to resolve their disagreements on policy and process in regard to the Independent Electoral and Boundary Commission (IEBC) reforms to ensure peace after the elections.

“The US is investing over $25 million in supporting Kenya’s electoral process that will be used in observation, and dispute resolution,” he said yesterday during a news conference in Nairobi.

He pointed out that the US does not support any party. “We support a free and fair election free of violent acts, this is your country and we will not step on anyone’s toes,” he said.

He had in the morning held discussion with President Uhuru Kenyatta where among other things they canvassed the planned closure of Dadaab camp and the security situation in South Sudan.

Mr Kerry and counterparts from six African nations met in Nairobi on Monday to discuss ways to prevent the world’s newest country from sliding back into civil war.

World powers and regional states have struggled to find leverage over its warring factions. US and European sanctions on military leaders coupled with threats of punitive actions by African states have done little to dissuade the factions.

Kenya has suffered attacks by Somali militants in the past three years and the government announced the closure of Dadaab camp despite calls from the international community to delay the move.

Kenya, the UN refugee agency (UNHCR) and Somalia signed a tripartite agreement in 2013 on voluntary repatriation of Somali refugees, some of whom have lived in Dadaab for decades. Since then Kenya has said that the process of implementation has been slow.

In May, the government released $10 million as well as gazetted a taskforce on repatriation of refugees to oversee, manage and expedite the process.

Kenya is hosting more than 600,000 refugees, some for the last 25 years. Three quarters of the refugees in Kenya are from Somalia, many of whom fled famine and war between 2010 and 2012.

Since 2011, Kenyan Defence Forces has been fighting the Somali extremist Al-Shabaab, which has retaliated by launching numerous attacks in the country, including Garissa attacks that killed 147 people and the Westgate mall that claimed 61 lives.