The result never looked in doubt once Neymar had capitalised on a poor error to break the deadlock after just 15 seconds. 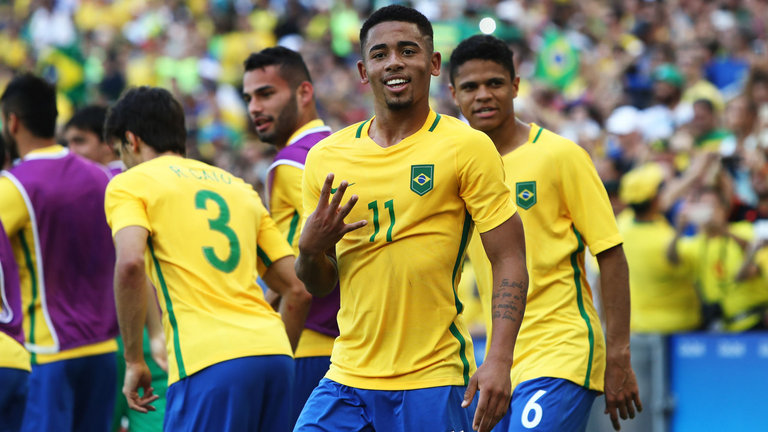 Jesus then took centre stage to soon make things even more comfortable – making the most of more woeful defending to net a second after 25 minutes, before finishing well for the Selecao’s third ten minutes later.

Paris Saint-Germain defender Marquinhos added a fourth early in the second half before Luan and a stoppage-time Neymar penalty completed the rout.

The host nation will take on Germany or Nigeria in the final, which takes place in the Maracana on Saturday, and will be looking to win a first gold medal in men’s football. What a time to do it.

Neymar and co have been hit and miss so far in their home Olympics, but it didn’t take long for Brazil to get off the mark in the Rio sun, with the skipper latching onto to an underhit back pass before squeezing the ball over the onrushing Luis Lopez in the Honduras goal to score.

The surprise semi-finalists were well out of their depth in the Maracana, and it wasn’t long before they were masters of their own downfall once more.

This time, it was Jesus who was the grateful recipient of some wayward Honduran passing, with possession surrendered far too easily, allowing Jesus to be played in delightfully by Luan, and the forward slid the ball home neatly to double his side’s advantage.

Ten minutes later it was three, with Neymar the creator this time, sliding another perfect pass into Jesus’ stride, and the City forward again made no mistake.

The hosts took their foot off the gas after the break, but were still allowed to score a fourth through Marquinhos, who fired into the roof of the net after the ball ran loose from a corner.

The hammering was complete when Luan tapped home after a fine move to add a 79th-minute fifth, and Neymar converted from the spot with ease in stoppage time to raise the roof once more.

Honduras flew into challenges and were somewhat fortunate to end the match with 11 men of the pitch, but they were never in this encounter, with a team who were ostensibly made up of players who play their club football in their homeland, and Brazil could not have asked for an easier passage in truth.