Muqdisho – (warsoor) – Somali dentist Abdikadir Adem spent all his savings on a battered van to rescue wounded people after he watched neighbors hit by bomb blasts bleed to death in wheelbarrows on a desperate five kilometer dash to hospital.

Ten years later, his single van has grown into a fleet of second-hand ambulances whose red, hand-stencilled Aamin Ambulance logo and nasal sirens are instantly recognized on the battle-scarred streets of Mogadishu.

Adem’s initiative, funded by dollars cajoled out of his medical students and donations wheedled from businessmen, highlights how private citizens in Somalia, Syria and Pakistan can provide lifesaving social services in countries abandoned by their governments and devastated by violence.

“It was so hard to watch people dying, we had to do something,” said the slim 40-year-old, whose elder brother was killed in a bombing in 2010. “Where people need me, there I go.”

Somalia has been mired in conflict since 1991, when clan warlords overthrew a dictator then turned on each other. Now al Qaeda-linked Islamists are detonating increasingly large bombs as they battle to overthrow the weak U.N.-backed government.

At least 723 people were killed and 1,116 wounded in bomb attacks in Somalia last year, according to Nairobi-based think-tank Sahan Research, up from 193 dead and 442 wounded in 2015. Most are civilians. There could be many more dead if it were not for Aamin, Somalia’s only free ambulance service.

Ambulance staff sometimes end up treating their own families. Adem’s other brother and his 10-year-old nephew were badly hurt in a double bombing at the Ambassador hotel in June.

“He called me and told me he was injured and I raced there,” Adem said. “We are always the first on the scene.”

It’s dangerous work. In 2008, Ethiopian troops battling the Islamists obliterated an Aamin Ambulance, its driver and a patient with a tank shell. This February, ambulance crews narrowly escaped a secondary blast that erupted moments after they took the patients from the first blast to hospital.

Once a graduation ceremony for medical students was bombed. Panicking victims, clothes afire, swamped the ambulances.

“We had to get them all out and put the fires out,” said an ambulance driver who has worked for Adem for years but asked that his name be withheld. “There were so many we took them to the hospital 14 at a time.” 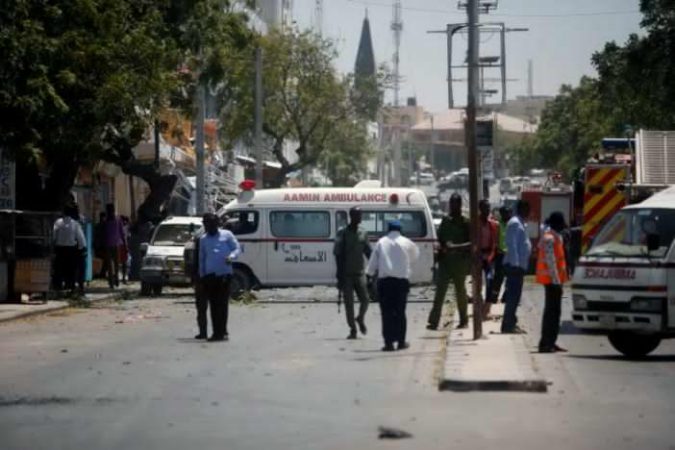 The 10 ambulances are imported second-hand from Dubai for around $5,000 each and have basic first aid equipment, a stretcher and a bench for paramedics or a second victim.

The 10 ambulances are imported second-hand from Dubai for around $5,000 each and have basic first aid equipment, a stretcher and a bench for paramedics or a second victim.

But the vast majority of cash comes from Somalis themselves, and Aden’s earnings as one of Somalia’s few foreign-trained dentists.

He got his degree in Pakistan in 2005, where he met philanthropist Abdul Sattar Edhi, who founded his own network of free ambulances and was nominated for the Nobel Peace Prize before his death last year.

Some aid groups compare Adem to Syria’s White Helmets, a voluntary organization whose work rescuing bomb victims has won global acclaim. But most Somalis don’t care about foreign comparisons. The Aamin crews are their own home-grown heroes.

“I would be dead today if it were not them,” Ali Nur told Reuters from his hospital bed. Aamin picked up the 30-year-old with major shrapnel injuries to the leg after a bombing earlier this month.

Aamin wants to expand beyond the capital, but there will be little help from the Somali government, which is dogged by allegations of corruption and whose tiny health budget is mostly eaten by salaries.

Out of a budget of $246 million last year, only $1 million was set aside for health. The prime minister and president’s offices got nearly $5 million each.

“We have no budget for emergency health,” Dr Abdullahi Hashi Ali, the director general of Somalia’s health ministry told Reuters.

“We have given an honorary certificate to Aamin Ambulance. We do not fund them. We encourage them and recommend aid agencies to help them. Aamin ambulances are doing a great service.”

Somalia has just inaugurated a new government this month, but there is unlikely to be more cash available. Aamin’s ambulance crews say they don’t do it for the money.

“The people who are dying daily are our wives, our children, our brothers,” said paramedic Mohamed, the sun glinting off his bifocals.

“Anyone with feeling cannot just stand by.”