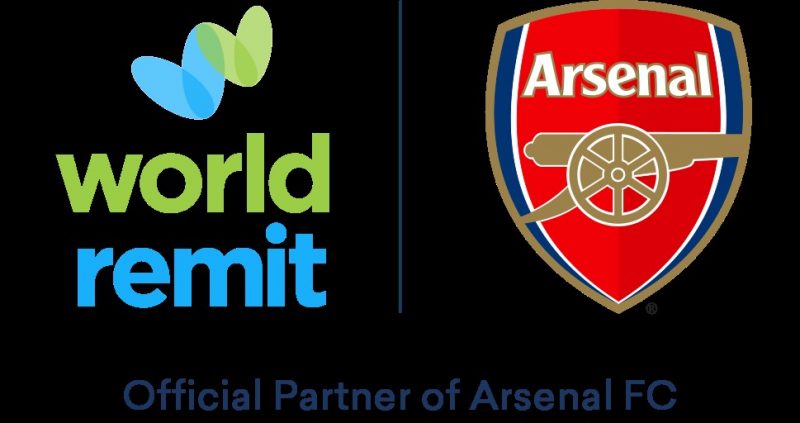 The global partnership will provide WorldRemit with a range of rights and player access to support its expansion plans. The partnership agreement includes match day LED branding for every Premier League, League Cup and FA Cup match along with TV interview backdrop presence for every home Premier League match along with global digital and social media rights across Arsenal’s online and mobile platforms.

WorldRemit will work closely with Arsenal’s first-team players to create unique content that will support new and existing community engagement initiatives around the world.

The partnership will also reward WorldRemit’s customers and Arsenal supporters through exclusive events and experiences using the power of football to inspire people. The company will launch the partnership with the first in a number of competitions to win travel to London and tickets to watch the team play at Emirates Stadium.

WorldRemit was founded by Chief Executive Officer Ismail Ahmed, to offer a better way to send small sums of money more frequently, bringing family and friends closer together – wherever they are.

WorldRemit’s service is available to senders in 50 countries and the company offers money transfers to more than 140 destinations across Europe, Asia, Africa, Australia and the Americas.

The company is a global leader in international transfers paid out as mobile money – where funds can be held on mobile telephone accounts. WorldRemit connects to over 130 million mobile money accounts, enabling money to be sent safely to friends and family even if the recipient doesn’t have access to a bank account.

Vinai Venkatesham, Arsenal’s Chief Commercial Officer, said: “This is an exciting new partnership with WorldRemit who under their inspirational CEO are looking to transform the way people can transfer money to family and friends around the world. We share mutual values and look forward to working together to build their global presence through our broadcast, social and digital channels which reach millions around the world. We look forward to a long and successful partnership.”

Ismail Ahmed, WorldRemit Chief Executive Officer, said: “Football is a language that everyone understands. Growing up in Somaliland, you would always see kids playing football – even during the war. It’s a passion which connects people all over the world and we are proud to sponsor a club whose values are so closely aligned to our own and those of our customers. This partnership with Arsenal creates opportunities for us to thank and reward our loyal customers and to connect with new audiences around the world. We look forward to using the power of football to support and inspire young people to fulfil their potential and to the opportunities which we can create to together.”

Distributed by APO Group on behalf of WorldRemit.

Arsenal (www.Arsenal.com) is one of the leading clubs in world football with a strong heritage of success, progressive thinking and financial stability.

The club was founded in 1886 in Woolwich, south London, before moving to Highbury in north London in 1913. We moved to Emirates Stadium in 2006.

In addition, Arsenal Women are the most successful English club in women’s football. They celebrate their 30th season this year. The club has 45,000 season ticket holders, 1.8m digital global members and one of the biggest digital followings in the game with a reach of 74m across all channels.

The Arsenal Foundation uses the power of football and the Arsenal name to inspire and support young people in north London and across the globe. The Arsenal Foundation raises funds each year and works with a number of key partners including Save the Children, Islington Giving, Willow and the Gunners’ Fund. Locally, Arsenal in the Community has delivered programmes to drive positive social outcomes for more than 30 years.

WorldRemit (www.WorldRemit.com) is creating a better way to send money. By making it easy to send smaller sums of money more frequently, WorldRemit is bringing friends and family closer together.
WorldRemit was founded in 2010. The Chief Executive Ismail Ahmed – a UK based entrepreneur from Somaliland – saw the opportunity to give customers a better service by offering faster, lower-cost and more secure digital money transfers compared to traditional ‘bricks and mortar’ agents.

The company has grown quickly: it has ranked in the Sunday Times Tech Track top 100 list of fastest growing tech companies for the past two years in a row. Backed by Accel Partners and TCV – investors in Facebook, Spotify, Netflix and Slack. Dr Ahmed was recently voted the third most influential person in the 2018 Powerlist of 100 people, which recognises those of African and African Caribbean heritage. In 2017 WorldRemit was recognised by the FT and the IFC as the UK’s most Transformative Business in the Transformational Business Awards.