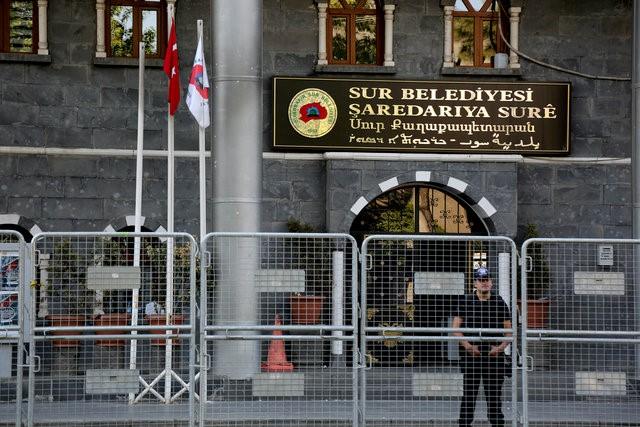 Police fired water cannon and tear gas to disperse demonstrators outside local government buildings in Suruc on the Syrian border as new administrators took over, security sources said. There were smaller protests elsewhere in the town.

There were also disturbances in the main regional city of Diyarbarkir and in Hakkari province near the Iraqi border, where police entered the municipality building and unfurled a large red Turkish flag, taking down the white local government flags that had previously flown.

President Tayyip Erdogan said this week the campaign against Kurdistan Workers Party (PKK) militants, who have waged a three-decade insurgency for Kurdish autonomy, was now Turkey’s largest ever. The removal of civil servants linked to them was a key part of the fight.

The 24 municipalities had been run by the pro-Kurdish opposition Peoples’ Democratic Party (HDP), the third largest in parliament, which denies direct links to the militants. It decried the move as an “administrative coup”.

“No democratic state can or will allow mayors and MPs to use municipality resources to finance terrorist organisations,” Justice Minister Bekir Bozdag said on Twitter. “Being an elected official isn’t a licence to commit crimes.”

Turkey’s battle against the PKK resumed with a new intensity after a ceasefire collapsed last year and with attempts by Kurdish groups in Syria’s war to carve out an autonomous Kurdish enclave on Turkey’s border.

In a message to mark the Muslim Eid al Adha holiday, Erdogan said the PKK had been trying to step up attacks since a failed military coup in July and that they aimed to disrupt Turkish military operations in Syria.

The U.S. embassy said it was concerned by reports of clashes in the southeast and that while it supported Turkey’s right to combat terrorism, it was important to respect the right to peaceful protest.

“We hope that any appointment of trustees will be temporary and that local citizens will soon be permitted to choose new local officials in accordance with Turkish law,” it said.

The crackdown comes as Ankara also pushes ahead with a purge of tens of thousands of supporters of U.S.-based Muslim cleric Fethullah Gulen, accused by Turkey of orchestrating the attempted coup in July. Gulen denies any involvement.

The mayors of four other municipalities, three from the ruling AK Party and one from the nationalist MHP opposition, were also replaced over alleged links to what the authorities call the “Gulen Terror Organisation”, or FETO.

The interior ministry said the 28 mayors, 12 of whom are formally under arrest, were under investigation for providing “assistance and support” to the PKK and to Gulen’s organization.

Turkey has sacked or suspended more than 100,000 people since the failed coup. At least 40,000 people have been detained on suspicion of links to Gulen’s network.

The crackdown has raised concern from rights groups and Western allies who fear Erdogan is using the failed coup as pretext to curtail all dissent, and intensify his actions against suspected Kurdish militant sympathizers.

Turkish officials say the moves are justified by the extent of the threat to the state.

The HDP, which says it promotes a negotiated end to the PKK insurgency, said it did not recognize the legitimacy of the mayors’ removal.

“This illegal and arbitrary stance will result in the deepening of current problems in Kurdish cities, and the Kurdish issue becoming unresolvable,” it said in a statement.

Tensions in the southeast had already been heightened since Turkey launched a military incursion into Syria two and half weeks ago dubbed “Operation Euphrates Shield”.

The operation aims to push Islamic State fighters back from the border and prevent Kurdish militia fighters seizing ground in their wake. Turkey views the Kurdish militia as an extension of the PKK and fears that Kurdish gains there will fuel separatist sentiment on its own soil.