Saudi Arabia – (warsoor) – Saudi authorities deployed drones to watch over nearly 2 million pilgrims as they ascended Mount Arafat at the climax of the haj pilgrimage on Sunday, part of stepped up efforts to avoid a repeat of last year’s crush.

In one of the deadliest disasters to befall the annual Muslim rite in decades, the crush killed nearly 800 pilgrims, according to Riyadh, though counts by countries of repatriated bodies showed over 2,000 people may have died, more than 400 of them Iranians. 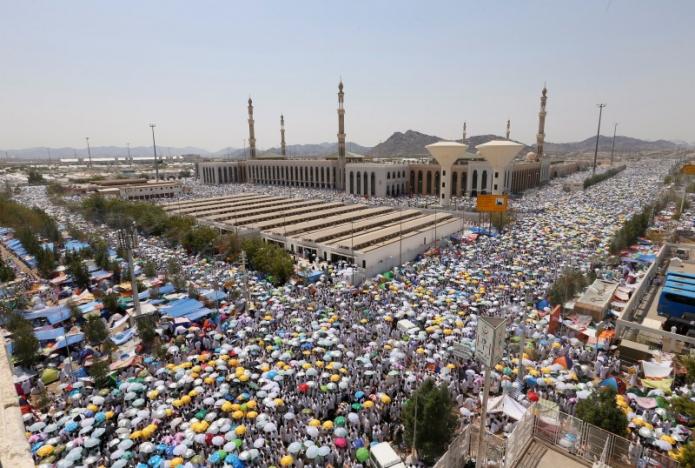 Chanting “here I am at thy service, O Lord,” the faithful climbed the craggy hills outside Mecca where Islam holds that God tested Abraham’s faith by commanding him to sacrifice his son Ismail and the Prophet Mohammed gave his last sermon.

“I have prayed to God to have mercy on us, give us relief and resolve Syria’s crisis,” said Um Fadi, wearing a traditional long black embroidered dress and head scarf native to her home in southern Syria.

“From the bottom of my heart, I pray that God will lift this agony from Syria and its people,” she added.

Saudi Arabia has said that 1.85 million pilgrims, most of them from outside Saudi Arabia, have arrived for the annual pilgrimage, a religious duty for every able-bodied Muslim who can afford the journey.

Saudi Arabia stakes its reputation on its guardianship of Islam’s holiest sites and organizing haj, a role that Iranian authorities have challenged this week as part of an escalating war of words over the handling of last year’s disaster.

The Grand Mufti, the kingdom’s top religious authority, warned Iran on Sunday that to disrupt the haj would be unacceptable, in comments reported by local daily al-Okaz.

“Any policy that aims to divert the haj from its proper course is un-Islamic and is a criminal policy,” he was quoted as saying.

Pilgrims from Iran are not attending haj this year, after talks between the two Middle East powers over haj arrangements broke down in May.

The 2015 crush, in which two large groups of pilgrims arrived together at a crossroads in Mina, a few kilometers east of Mecca, on their way to performing the “stoning of the devil” ritual at Jamarat, was the worst disaster to strike the annual pilgrimage for at least 25 years.

The Saudi authorities redesigned the Jamarat area after two stampedes, one in 2004 and one in 2006, killed hundreds of pilgrims, and the frequency of such disasters has greatly reduced as the government spent billions of dollars upgrading and expanding haj infrastructure and crowd control technology.

The haj ministry has said it had prepared a strict timetable for pilgrims from various countries to follow when leaving and returning to their accommodation.

Authorities have also deployed drones to reinforce a network of electronic surveillance of the crowds that would alert authorities to intervene quickly if necessary.

The pilgrims will spend the day on the mountain and move by sunset to the rocky plain of Muzdalifa, where they will gather pebbles to stone columns symbolizing the devil at another location called Jamarat on Monday, which marks the first day of Eid al-Adha (feast of sacrifice).