Somaliland – (warsoor) – MPs in the self-declared republic of Somaliland have agreed to allow the United Arab Emirates (UAE) to set up a military base in the port of Berbera.

Observers say the deal has proved controversial among Somaliland’s neighbours in the Horn of Africa.

The UAE already has a military facility at Eritrea’s Assab port for use in a campaign against Yemeni rebels.

It is part of a coalition that has fought Houthi rebels and imposed a naval blockade on Yemen since 2015.

During the parliamentary vote, 144 legislators supported the military base, two voted against, two abstained – and nine others who opposed the plan and shouted in the chamber were escorted out by soldiers.

Last year, Somaliland, which declared itself independent from the rest of Somalia in 1991, signed a $442m (£353m) deal for a Dubai-based firm to upgrade the port of Berbera, which mainly exports livestock to the Middle East.

The Horn of Africa is strategic for Gulf nations because of ongoing military operations in Yemen and in the long term to protect their shipping interests in the Red Sea and Gulf of Aden.

Djibouti has been the regional hub for foreign military bases, but now faces competition from its next-door neighbour. 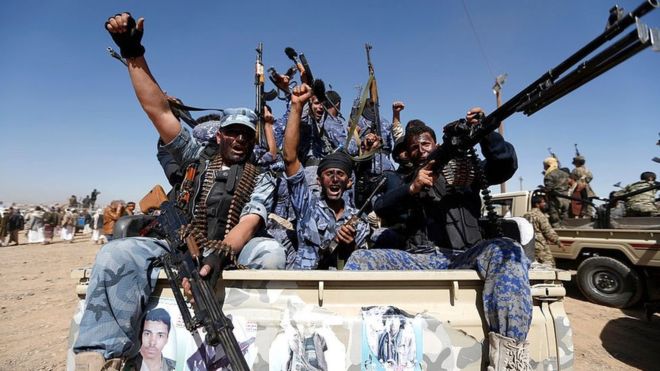 In Somaliland, the UAE has an alternative and less controversial location for a military base than Eritrea, which is under UN sanctions.

The Emiratis will also provide much-needed training and equipment for Somaliland forces. The threat posed by militant Islamist group al-Shabab in Somalia has been largely kept at bay in the breakaway region – having a stronger local force backed by an international partner will shore up this stability.

Its port in Berbera is not solely for military use. Its expansion could provide Somaliland with more robust economic opportunities, particularly targeting its landlocked neighbour Ethiopia.

But as Somaliland is not internationally recognised, the authorities will need to be wary of any legal complications that could arise, given the UN-backed government of Somalia was not party to the base or expansion of Berbera.

Yemen, across the Gulf of Aden from Somaliland, spiralled into civil war in 2014 when Houthi rebels overran the capital.

The Saudi-led coalition has since deployed warships in the Red Sea and Gulf of Aden.

It says the naval operation is to stop the Houthis receiving weapons from Iran, which backs the rebels but denies providing military support.