Mogadishu-  (Warsoor) – The President of the Federal Republic of Somalia H.E. Hassan Sheikh Mohamoud has on Monday attended a ceremony to mark Europeans Union’s Day which took place in the Somali capital Mogadishu.

The President of Somalia has at length talked about the relation between Somalia and the European Union, since Somalia took its independent till to date.

“The European Union has played significant role in bringing to Somalia to where its now, be it the rebuilding of the country, the security and the other development projects, and on our part making use out of those imperative projects we have reached at a tangible stage, Somalia has tremendously moved forward will never reverse” said President Hassan

President Hassan has also added that the Somali government soldiers and the African Union troops are engaged in fight with Al-Shabab militants, which still carrying out their barbaric attacks of which the latest one was an attack which they have carried out in dawn Monday morning in which they killed five Somali Police traffic policemen.

The President has appealed from the European Union to generate work for the Somali youths. 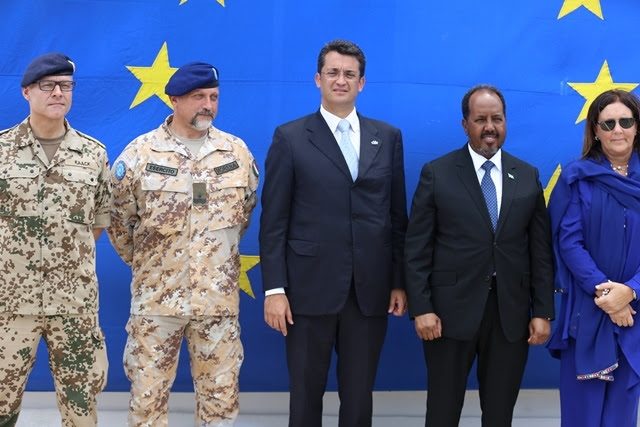 “We are highly appealing from the European Union and the international committee to help us in opening vocational training centers in which the youths can lead them to use their skills in obtaining jobs, in this manner we can lure many youths who are now fighting alongside Al-Shabab militants” added President Hassan Sheikh

The Somali President has praised the European Union for their role in the fight against pirates, saving Somali youths who are illegally voyaging in the international waters.

On the other hand the President added that there is an ongoing talk between the Italian government and the Somalia government regarding about how to bring back Somali youths who have illegally reached Italy.

Finally the President flanked by the deputy Prime Minister honorable Mohamed Omar Arte have paid visit at an open plot which the EU will built the EU compound in Mogadishu.