Somalia -(warsoor) – An oil tanker has been hijacked by suspected pirates off the coast of Somalia, reports say, the first such hijacking in the region in five years.

The ship sent a distress signal on Monday evening, saying it was being approached by high-speed boats.

The gunmen have told a local official they are fishermen whose equipment was destroyed by illegal fishing vessels.

Piracy was rampant off the Somali coast until increased patrols by European naval forces contained the problem.

The vessel was en route from Djibouti to the Somali capital, Mogadishu, and was then diverted towards the port of Alula in the semi-autonomous region of Puntland.

Its tracking system has reportedly been switched off.

The Sri Lankan Foreign Ministry has confirmed that eight of its nationals were on board.

Ali Shire Mohamud Osman, the district commissioner in the town of Alula, near where the ship has been taken, told the BBC he was trying to find out if the gunmen really were fishermen or were organised pirates.

“The men who are holding it claim that they are fishermen who suffered from the illegal fishing in the area. However, if we confirm that they are pirates, I will ask them to leave the area immediately. Otherwise, we will see how we can save the vessel,” he said. 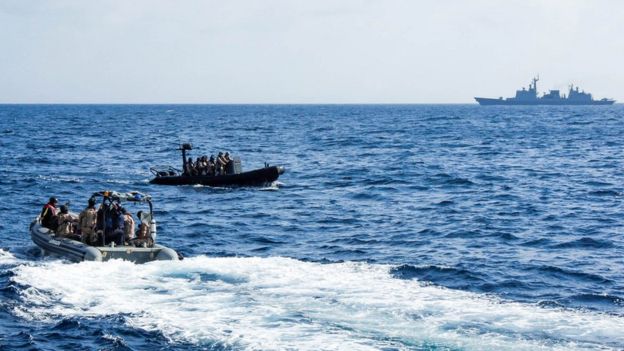 The vessel was carrying oil and was owned by the United Arab Emirates (UAE), despite conflicting reports over the flag it was sailing under, he added.

The chairman for Puntland’s anti-piracy agency, Abdirizak Mohamed Dirir told the BBC the attack could be linked to illegal fishing along Somalia’s coast.

“Incidents of piracy have reduced. However, we cannot ignore the problems caused illegal fishing on our shores; regardless who is involved and where they are from, it’s something we have been complaining about for so long,” he said.

The European Union Naval Force, which runs anti-piracy operations in the area, said it was too early to confirm pirate involvement.

It has sent a plane to the area to investigate.

Eight people are believed to have been on board the ship, which can carry almost 12,000 tonnes of cargo.

John Steed of the aid group Oceans Beyond Piracy, speaking to Reuters news agency, said, “The ship reported it was being followed by two skiffs yesterday afternoon. Then it disappeared.”

Piracy off the coast of Somalia, usually for ransom, has reduced significantly in recent years, in part because of extensive international military patrols as well as support for local fishing communities.

However, some smaller fishing vessels have recently been seized in the area.

In 2015, Somali officials warned that piracy could return unless the international community helped create jobs and security ashore, as well as combating illegal fishing at sea.

Some Somali fishermen turned to piracy after their livelihoods were destroyed by illegal fishing from foreign trawlers, who benefited from the lack of a functioning coastguard in the country following years of conflict.