Mogadishu – (warsoor) – A top Somalia general known for fighting the jihadist Shabaab group, was killed on Sunday when a suicide bomber rammed an explosives-packed car into his vehicle, officials and witnesses said.

General Mohamed Roble Jimale Gobale was killed along with four of his security guards in the attack in the capital Mogadishu that was claimed by the Al-Qaeda linked Shabaab. 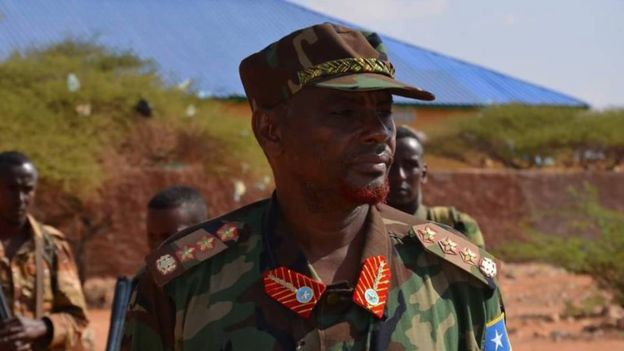 “There was a heavy blast caused by a car loaded with explosives,” said security official Abdiaziz Mohamed.

“Several members of the military were killed in the incident, including a senior commander.”

Witnesses said Gobale’s vehicle was travelling on the road when another vehicle rammed it, causing a massive blast.

The attack took place after the convoy had left the military hospital and was heading towards the defence ministry.

“The blast was very huge, I saw smoke and fire overshadowing the whole area,” witness Abdi Hassan told AFP, saying he understood that Gobale had died in the attack.

The attack was claimed in a statement broadcast on the Shabaab’s Andalus radio and quoted by a pro-Shabaab website.

Gobale was the commander of the army’s Third Brigade. He had fought the Shabaab since 2007, leading a brigade that battled its militants in several neighbourhoods of the capital until they were forced out in 2011.

Since then, they have continued their attacks on government, military, civilian and foreign targets in a bid to overthrow the internationally-backed government.

The group is expected to try and violently disrupt elections which are to be held later this month and in October.

Gobale played an important role in the fight against Al-Qaeda linked militants in southern Somalia. His brigade was stationed in the lower Shabele region where the group has major influence.

The last Shabaab attack on Mogadishu was barely a fortnight ago when five people were killed by a suicide car bomb outside a popular hotel near the presidential palace.

Last week, Mogadishu hosted a top-level African gathering for the first time in more than four decades — a one-day summit of the IGAD regional trade bloc.

This weekend, Shabaab fighters disguised as Kenyan soldiers and riding Kenya army vehicles attacked a military base in Elwak, a town near the Kenyan border. They looted the base and left after briefly taking control of the town.

They have also staged repeated attacks in Kenya and a recent security analysis warned the group was expanding its horizons with cells active in Djibouti, Ethiopia, Kenya, Tanzania and Uganda as well as Somalia.