After days of disruptions affecting networks worldwide, a top US official said the number of computers affected had reached 300,000, but that infection rates had slowed.

In the first clues of the origin of the massive ransomware attacks, Google researcher Neel Mehta posted computer code that showed similarities between the “WannaCry” malware and a vast hacking effort widely attributed to Pyongyang.

Other experts quickly jumped on this as a sign — although an inconclusive one — that North Korea may have been behind the outbreak. 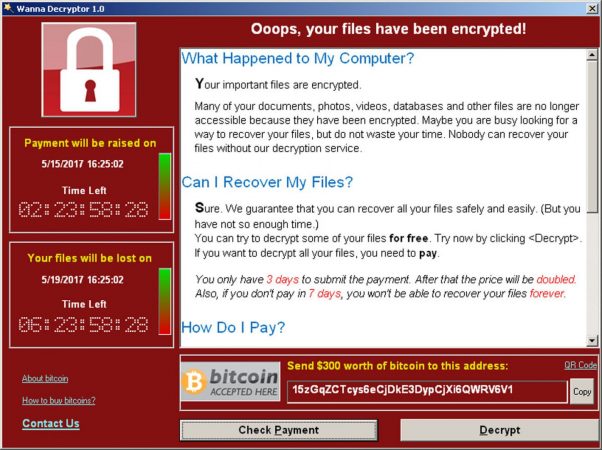 “We believe this might hold the key to solve some of the mysteries around this attack,” said researchers at the Russian-based security firm Kaspersky, adding that further research was needed.

The group’s chief executive Itai Tevet said in a tweet: “@IntezerLabs confirms attribution to North Korea for #WannaCry, not only because of the function from Lazarus. More info to come.”

Tom Bossert, President Donald Trump’s top cyber and homeland security adviser, brushed aside suggestions that the United States was to blame for the attack, which stemmed from a flaw discovered by the US National Security Agency and later leaked.

“This was not a tool developed by the NSA to hold ransom data,” he said, noting that no US government systems had been hit.

“This is a global attack,” he added.

Russian President Vladimir Putin earlier had pointed the finger at the United States.

“A genie let out of a bottle of this kind, especially created by secret services, can then cause damage to its authors and creators,” the Russian leader said on the sidelines of a summit in Beijing.

Russia has recently been accused of cyber meddling in several countries, but Putin said they had nothing to do with the attack.

There had been concern that Monday’s start of the working week would see an upsurge in attacks.

But the cross-border police agency Europol said the situation was “stable” after attacks that struck computers in British hospital wards, European car factories and Russian banks.

“The number of victims appears not to have gone up,” a senior spokesman for Europol, Jan Op Gen Oorth, told AFP.