ROME – (warsoor) – Doctors Without Borders (MSF) said on Saturday it was suspending its migrant rescues in the Mediterranean because it felt threatened by the Libyan coastguard and the Italian government’s policies have made its job harder.

The aid group’s decision is the latest development in mounting tensions between Rome and NGOs as migration dominates Italy’s political agenda ahead of elections early next year.

“We are suspending our activities because now we feel that the threatening behavior by the Libyan coastguard is very serious … we cannot put our colleagues in danger,” the president of MSF’s Italian arm Loris De Filippi told Reuters. 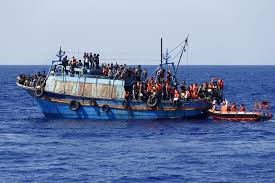 Almost 600,000 migrants have arrived in Italy over the past four years, the vast majority setting sail from lawless Libya in flimsy vessels operated by people smugglers. More than 13,000 migrants have died trying to make the crossing.

Charity boats have played a growing role in rescues, picking up more than a third of all migrants brought ashore so far this year against less than one percent in 2014.

However, Italy fears the groups are facilitating people smuggling and encouraging migrants to make the passage, and it has proposed a Code of Conduct governing how they operate.

Some groups, including MSF, have refused to sign the code.

They object to a requirement that Italian police officers be on their boats and that the boats must take migrants to a safe port themselves, rather than transferring them to other vessels to allow smaller boats to stay in the area for further rescues.

MSF operates one rescue ship in the Mediterranean, the Prudence, currently docked in the Sicilian port of Catania.

In the last six weeks the number of migrant arrivals in Italy has slowed sharply and Rome has begun collaborating more closely with the Libyan coastguard, which De Filippi said was threatening the NGOs and preventing them from working.

He said the Libyan coastguard had demanded the NGOs should leave an area of up to hundreds of kilometers around its coast, whereas previously they had been allowed to conduct search and rescue operations as close as 11 nautical miles to the mainland.

“Last year the coastguard fired 13 shots on our boat and that was in a situation that was much calmer than the present one,” said De Filippi.

He said MSF would continue its collaboration with another aid group, SOS Mediterranee, which operates a rescue ship in the Mediterranean with MSF doctors on board.

De Filippi said the Rome government’s Code of Conduct for NGOs and its support for the Libyan coastguard showed it was now mixing the humanitarian goal of saving lives with “a political and military intention” of reducing arrivals.

“We refuse to be co-opted into a system that blocks people from seeking safety and protection,” MSF tweeted, adding that the European Union’s immigration policies showed it was “determined to trap people in Libya.”

Oscar Camps, the founder of Proactiva Open Arms, another aid group active in the Mediterranean, also took aim at the EU, tweeting: “the first NGO out, this is just what the EU wants.”

An Italian government spokesman was not immediately available to comment, while Matteo Salvini, leader of the anti-immigrant Northern League, said MSF’s move meant there would be “thousands fewer illegal immigrants for Italians to maintain.”

Last week Italy began a naval mission in Libyan waters to train and support its coastguard, despite opposition from factions in eastern Libya that oppose the U.N.-backed government based in Tripoli.

General Khalifa Haftar, a commander aligned with an Eastern-based parliament, told Italian daily Corriere della Sera on Saturday the presence of Italian military vessels in Libyan waters was unacceptable but he would not attack them.