tone-throwing migrants in a Greek detention camp clashed with police on Tuesday hours after two ferries shipped refugees back to Turkey under a disputed deal intended to stem the human influx into Europe.

Plumes of smoke billowed from the Moria compound on Lesbos island that Pope Francis visited on April 16. Tensions simmering for days boiled over just after the Dutch and the Greek ministers responsible for migration toured the camp.

Garbage bins were set on fire, a police spokesman said, and migrants “were throwing stones and pieces of metal at police”. Earlier about 200 youths broke through a partition in the camp. 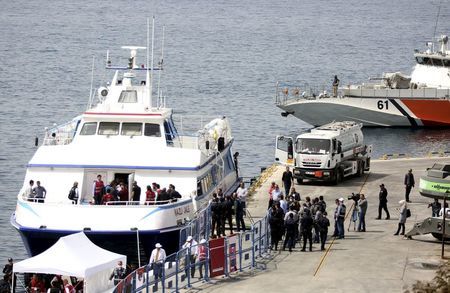 Just over 340 people have so far been returned to Turkey since April 4 under the accord agreed with the European Union in March after more than 1 million people fleeing war and poverty in the Middle East and beyond reached the continent last year.

On Tuesday, 13 people were deported from the island of Lesbos to the Turkish town of Dikili and five were ferried back from Chios to Cesme, police said. Most were Afghans and none had requested asylum in Greece, a government official said.

The United Nations High Commissioner for Refugees (UNHCR) and human rights groups have questioned whether the deal is legal or moral. They are also concerned about whether Turkey is a “safe” country for returnees. UNHCR does not currently have access to the Kirklareli camp returnees are sent to.

The European Commission said on Tuesday it had been formally reassured by Turkey that it would grant access to asylum procedures to all asylum-seekers sent back from the bloc, a key outstanding element in the deal.

Turkey applies the Geneva Convention on refugees only to Europeans, offers limited protection to Syrians and no legal guarantees for other nationalities.

International law bans refoulement, or sending people back to a country where their lives or safety are at risk.