The dramatic turn of events came just an hour and a half after President Alassane Ouattara announced he had agreed to the soldiers’ demands for bonus payments and improved living standards.

In addition to Defence Minister Alain-Richard Donwahi, the deputy commander of the elite Republican Guard, the mayor of Bouake and other local officials as well as journalists were trapped inside the sub-prefect’s residence. 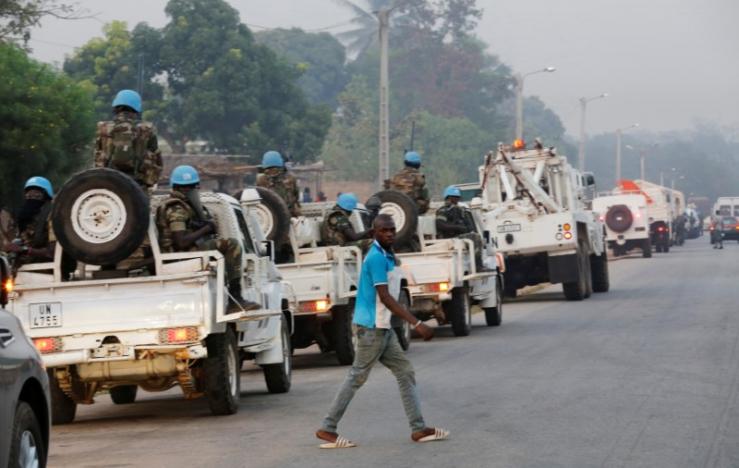 A crowd of angry soldiers massed outside the house, and the Reuters reporter said he heard some loudly shouting that they wanted their bonuses paid immediately, not next week.

Over the next two days, soldiers at military camps in cities and towns across the country, including the commercial capital Abidjan, joined the mutiny.

Ivory Coast – French-speaking West Africa’s largest economy – has emerged from a 2002-11 political crisis as one of the continent’s rising economic stars.

However, years of conflict and a failure to reform its army, thrown together from a patchwork of former rebel fighters and government soldiers, have left it with an unruly force hobbled by internal divisions.

Speaking to his government ministers and reporters before the incident at the sub-prefect’s house, Ouattara said he had agreed to some of the soldiers’ grievances but chastised them for sparking the unrest.

“I would like to say that this manner of making demands is not appropriate. It tarnishes the image of our country after all our efforts to revive the economy,” Ouattara said before calling upon the soldiers to return to barracks.

A member of the uprising close to the negotiations had earlier said the mutineers were satisfied with the deal and were preparing to leave the streets.

“It’s over,” Sergeant Mamadou Kone told Reuters. “Some of our soldiers will remain in place to manage the security of shops and banks, but the majority of soldiers will return to barracks beginning tonight.”

The revolt comes two years after hundreds of soldiers barricaded roads in cities across Ivory Coast demanding back pay in a near identical uprising.

Then too the government agreed a deal that included amnesty from punishment and a financial settlement for the mutineers. The repeat of such a solution raises the risk they could be encouraged to do it again.