In a swiftly issued statement, Israeli Prime Minister Benjamin Netanyahu accused Kerry of showing bias. He said Israel did not need to be lectured to by foreign leaders and looked forward to working with incoming President-elect Donald Trump, who has vowed to pursue more pro-Israeli policies.

In a 70-minute speech with mere weeks left in his tenure, Kerry said Israel “will never have true peace” with the Arab world if it does not reach an accord based on Israelis and Palestinians living in their own states. 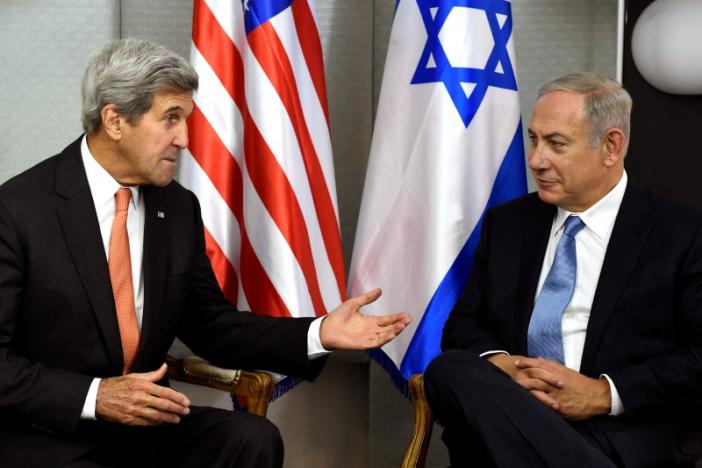 Ties reached a low point last week when Washington cleared the way for a U.N. resolution that demanded an end to Israeli settlement building, prompting Israeli government officials to direct harsh attacks against Obama and Kerry whom they insisted had orchestrated the resolution.

“Despite our best efforts over the years, the two-state solution is now in serious jeopardy,” Kerry said at the State Department. “We cannot, in good conscience, do nothing, and say nothing, when we see the hope of peace slipping away.”

The United States had appealed to Israel in public and private to stop the march of settlements countless times, Kerry said.

His parting words are unlikely to change anything on the ground between Israel and the Palestinians or salvage the Obama administration’s record of failed Middle East peace efforts.

The Israeli leader said Kerry “obsessively dealt with settlements” and barely touched on “the root of the conflict – Palestinian opposition to a Jewish state in any boundaries”.

The Israelis are looking past Obama and expect to receive more favorable treatment from Trump, who takes office on Jan. 20. But they fear Kerry’s remarks will put Israel on the defensive, and prompt other countries to apply pressure, including by adding fuel to the boycott, divestiture and sanctions movement against Israel, especially in Europe.

“We cannot continue to let Israel be treated with such total disdain and disrespect. They used to have a great friend in the U.S., but not anymore,” Trump said in a series of tweets. “Stay strong Israel, January 20th is fast approaching!”

He has vowed to move the U.S. Embassy from Tel Aviv to Jerusalem, which would upset many countries, and has appointed as ambassador a lawyer who raised money for a major Jewish settlement.

Kerry’s speech provided some insights into an issue that he personally feels passionate about and had hoped to resolve during his nearly four years as secretary of state.

The United States abstained in the Dec. 23 U.N. resolution, in what many see as a parting shot by Obama.

Kerry vigorously defended the resolution. “It is not this resolution that is isolating Israel. It is the permanent policy of settlement construction that risks making peace impossible.”

In a pointed reply to Netanyahu who said last week that “Friends don’t take friends to the Security Council”, and who has insisted the Obama administration had orchestrated the resolution, Kerry hit back, saying: “Friends need to tell each other the hard truths, and friendships require mutual respect.”

Kerry defended Obama’s commitment to Israel’s security and U.S. support for Israel in international platforms. Earlier this year, the United States and Israel agreed $38 billion in military assistance over the next decade.

In Jerusalem, Israel approved construction of a multi-storey building for settlers in annexed East Jerusalem on Wednesday, an NGO said, after postponing authorization of hundreds of other homes.

Washington considers the settlement activity illegitimate and most countries view it as an obstacle to peace. Israel cites a biblical, historical and political connection to the land – which the Palestinians also claim – as well as security interests.

Netanyahu, for whom settlers are a key constituency, has said his government has been their greatest ally since the capture of the West Bank and East Jerusalem in a 1967 war.

Some 570,000 Israelis now live in the West Bank and East Jerusalem, together home to more than 2.6 million Palestinians. Peace talks have stalled since 2014.

Emphasizing that Washington could not impose an outcome, Kerry outlined principles for a two-state solution which envisioned secure and recognized international borders between Israel and a viable and contiguous Palestine – based on the 1967 lines before it seized the West Bank, East Jerusalem and Gaza. The two sides would agree to land swaps.

Netanyahu has described the 1967 lines as indefensible and has said Israel would never return to them.

Kerry also called for an agreed resolution for Jerusalem as the “international recognized capital of the two states”.

“We salute the clear, courageous and committed speech of John Kerry in favor of peace in the Middle East and the solution for the two States, Israel and Palestine,” French Foreign Minister Jean-Marc Ayrault said.

France will convene some 70 countries on Jan. 15 for a Middle East peace conference in Paris.

“However, the parameters that he laid out for a permanent peace agreement perpetuate the same framework and process that have failed to advance the cause of peace for more than two decades now,” Buttu said in a statement.

In substance, Kerry’s proposals did not depart from long-standing U.S. views on the building blocks of a future deal, and echoed elements of a speech former President Bill Clinton gave in 2001 as he prepared to hand over power to George W. Bush.

But back then “the parties were closer, and the United States and Israel were not at such sharp odds,” said David Makovsky, a former senior adviser at the State Department on the Israeli-Palestinian issue.