Libya – (warsoor) – The embattled son of the late Libyan strongman Muammar Gaddafi was released from jail several weeks ago and has been living in the town of Zintan, his lawyers have told FRANCE 24.

Saif al-Islam – once widely regarded as Gaddafi’s likeliest successor – was sentenced to death in 2015 for crimes committed during the revolution that overthrew his father. He has nevertheless been allowed to walk free under an amnesty provision by the Libyan government as it struggles to unite the country. 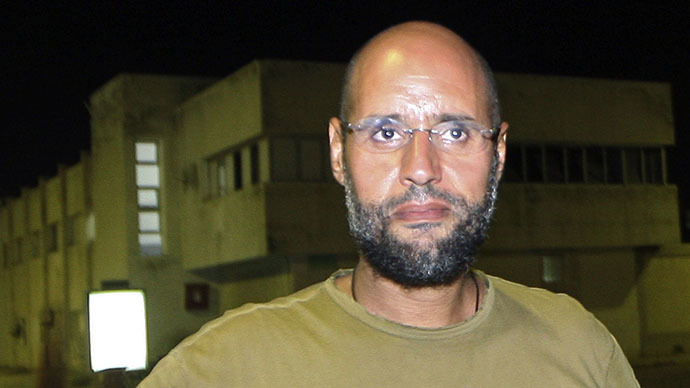 Lawyer Marcel Ceccaldi on Friday confirmed his client had left jail on April 12, 2016 as originally reported by FRANCE 24, adding that he was not serving time under house arrest.

Ceccaldi said Saif al-Islam wanted to “contribute to the political unification of Libya” and “fight against terrorism,” in reference to the Islamic State group, which has taken over key parts of the north African country.

Another lawyer, Karim Khan, said Wednesday that Saif al-Islam was released under an amnesty declared by the Tobruk parliament, the internationally recognised authority that governed part of Libya before the national unity government of Fayez al-Sarraj took over in March.

The lawyer said the release was made “in accordance with (Libyan) law”.

Khan declined to say whether he had spoken to his client, saying only that he “is well and safe and in Libya”.

Saif al-Islam had been held since 2011 by a militia in Zintan, a mountainous western region beyond the control of authorities in the capital, Tripoli.

His captors refused to transfer him to Tripoli, where he was sentenced to death in absentia by a court in the city in July 2015 for his part in the killing of protesters during the uprising that toppled his father.

The verdict had drawn condemnation abroad, with Human Rights Watch saying the trial was riddled with legal flaws and carried out amid widespread lawlessness undermining the credibility of the judiciary.

The proceedings began in April 2014 before fighting between rival factions in Tripoli erupted, and the power struggle has loomed large in the unravelling of state authority around the vast, oil-producing North African country.

Saif al-Islam is also wanted by the International Criminal Court (ICC) in The Hague, which issued an arrest warrant in 2011 on preliminary charges of crimes against humanity, murder and persecution for being part of the inner circle of his father’s regime.

Khan said he would file an application to make the ICC case inadmissible, arguing that his client has already been tried by his home country.

Invoking the principle of “double jeopardy”, he said: “It is prohibited to try an individual twice for the same offense”.

Asked whether dropping charges against Saif al-Islam would hurt reconciliation efforts in the war-torn country, the lawyer said it was “up to Libyans to decide what is best for peace and reconciliation”, not the ICC.

According to a source quoted by French daily Le Monde, he has been living in Zintan in a “comfortable house with a new wife and their three-year-old daughter”, and able to move around freely.