France – (warsoor) – Paris, France – A two-state solution in the Israeli-Palestinian conflict is the only way to bring lasting peace and security to the Middle East, France President Francois Hollande said as officials and civil society groups from more than 70 countries gathered to discuss ways of bringing the conflict back to the negotiating table.

During Sunday’s conference in Paris, Hollande highlighted the wars in Syria and Iraq and said Middle East peace can only be achieved through a negotiated settlement directly between Palestinians and Israelis.

“How could we expect the Middle East to return to stability if we cannot find a solution for one of its oldest conflicts?” he asked.

The summit on the moribund Israeli-Palestinian peace process was the second called by France in the last eight months.

It was not attended by either Benjamin Netanyahu, Israel’s prime minister, or Palestinian Authority President Mahmoud Abbas, which led many observers to question its significance.

France has been a major backer of the Palestinians, providing $43m in aid in 2015 and Palestine remains the leading beneficiary of French budgetary assistance.

Hollande noted more than 150 organisations from Palestine and Israel have been brought together under the peace initiative with positive results.

But despite France’s efforts, analysts expressed scepticism at the relevance of the Paris summit.

Alain Gresh, a journalist from France’s Le Monde Diplomatique newspaper, said the initiative was launched in response to the French parliament vote in December 2014 to officially recognise the State of Palestine, which failed to come to fruition. 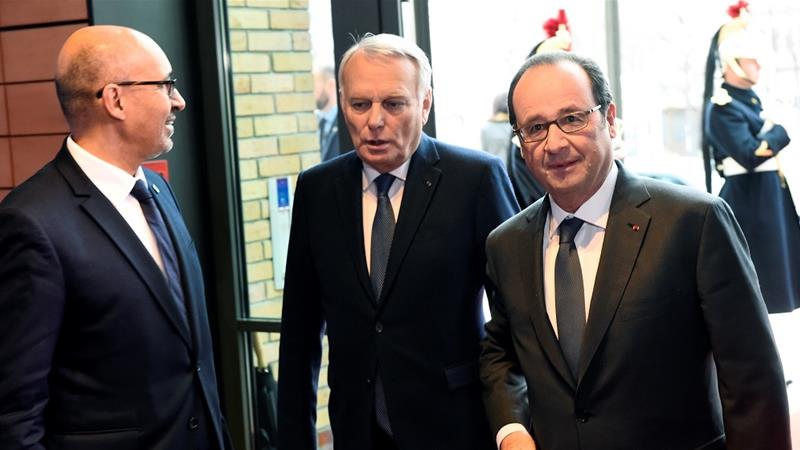 “The then-foreign minister Laurent Fabius said they wouldn’t recognise it, but that they’d try a diplomatic initiative. And if this initiative was to fail, they’d recognise Palestine. But little by little, this talk of recognition disappeared,” said Gresh.

Of the 193 UN member states, 137 officially acknowledge Palestine as an independent state.

Francois Burgat, a political scientist and author, said if the French government wanted to meaningfully bring about peace, it could have taken a harder line with Israel as the occupying power.

“In the last crisis in Gaza, we saw Hollande affirm Israel’s ‘right to defend itself’ and for the first 15 days into the war, France took no initiative to stop the bloodshed,” Burgat, a senior research fellow at the French National Center for Scientific Research, told Al Jazeera.

While no Palestinian officials attended the Paris meeting, Husam Zomlot – ambassador at large for the Palestinian government – told Al Jazeera the French peace initiative was a “a crucial step to reaffirm the international consensus about the Palestinian cause – that is a cause of foreign military occupation that must end”.

The two-state solution, agreed on in the 1993 Oslo accords, has been largely lost with negotiations between the two sides broken off by ever-increasing Israeli settlement activity and violence carried out by both sides.

The settlements are considered illegal under international law and were denounced last month by the passing of a UN Security Council resolution, which was vehemently castigated by Israeli officials.

“The conference convening today in Paris is a futile conference,” he said.

“It was coordinated between the French and the Palestinians. It aims to force conditions on Israel that conflict with our national interests.

“It further distances peace because it hardens the Palestinians’ positions and helps them avoid direct negotiations without preconditions.

“Tomorrow will look different – and tomorrow is very close.”

Another variable in any two-state solution is the role of the US, Israeli’s staunch ally.

President-elect Donald Trump has nominated a pro-settlement American as US ambassador to Israel, and suggested the US embassy could be moved from Tel Aviv to Jerusalem in what would be a highly contentious decision.

While the Paris meeting was praised by participants, Gresh said he believes even French officials are sceptical it will help revive peace talks as Trump prepares to assume the US presidency on January 20.

“I don’t think French diplomats think this initiative will go anywhere, especially because of Trump,” he said.

“When the French thought about this initiative, they thought they’d be working with [presidential candidate Hillary] Clinton, but now they clearly see this going nowhere.”

Hollande said ultimately it is up the leaders of Israel and Palestine to secure a lasting peace.

“The idea is not to dictate to the parties in the conflict the way forward,” he said.

“I would like to reaffirm here that direct negotiations between Palestinians and Israelis are the only way forward. It is up to their leaders to find an agreement and to convince their people of the necessary compromises.”