Italy – (warsoor) – The Italian navy has recovered the bodies of 45 migrants who drowned Friday in the latest shipwreck, while dozens of others are still missing in the third major tragedy in the Mediterranean in as many days.

Italian coastguards sent in rescue ships after a call for help that spoke of 350 people in the water, just a day after another shipwreck had left up to 30 dead. 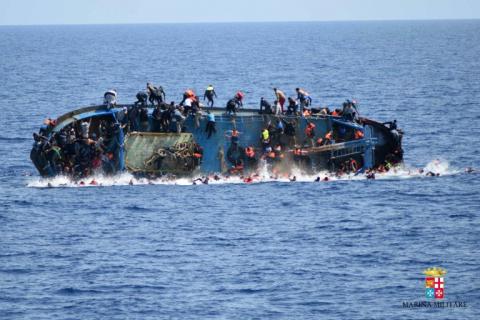 With search efforts continuing late into the day, the navy saved 130 people and was still searching for others, it said.

“The vessel Vega rescued 135 migrants from a sinking vessel. Forty-five bodies were recovered and search efforts are ongoing,” the navy said on Twitter.

While the European Union has pushed hard to limit the influx of people fleeing war and poverty, a bout of good weather as summer arrives has kicked off a fresh stream of boats trying to make the perilous crossing from Libya to Italy.

The coastguard said about 1,900 people were saved on Friday from 16 vessels in distress, adding to an estimated 10,000 people already rescued near the Libyan coast in the past four days.

“It’s astounding. We are almost at the level of the Greek islands last year,” said Flavio di Giacomo, a spokesman for the International Organization for Migration, referring to a period when thousands arrived there from Turkey every day.

About 40,000 migrants and refugees have arrived in Italy’s southern ports so far this year.

But in one of the worst tragedies in the Mediterranean recently, a fishing trawler with some 650 people capsized off the coast of Libya on Wednesday.

The Italian navy, which captured the tragedy in a horrifying video that shows the boat roll over and dump its passengers into the water, was able to rescue about 560 people.

But at least five people died and 100 are still feared missing, according to many survivors who reported having lost a loved one or a fellow passenger.

On Thursday, the EU’s naval force said up to 30 migrants were believed to have died after another ship flipped over off Libya.

A Doctors Without Borders (MSF) team in Sicily who assisted the survivors of Wednesday’s shipwreck could hardly fathom their patients’ distress.

“Nearly all of them lost one or several relatives,” MSF head of mission Andrea Anselmi said, adding that it was “hard to believe” that tragedies at such a scale could be happening.

French merchant navy officer Antoine Laurent, who has taken part in rescue operations in the Mediterranean, said the rush to get to safety often led vessels to sink.

“On migrant boats, those in the hold act as a ballast but they try to get out as soon as possible. Yesterday they did exactly that and upset the boat’s centre of gravity and it lost all stability,” he told AFP.

In the single deadliest migrant boat sinking since the crisis began, some 700 people died in April last year, also off the coast of the chaos-wracked north African country.

The flow into Europe via Greece and the Balkans route, which hundreds of thousands of people used in 2015, has slowed to a trickle after countries shut their borders.

But more than 26,000 migrants have already landed on Italy’s shores so far this year after setting off from Libya.

In France meanwhile, prosecutors said they had launched a probe into a massive brawl in the “Jungle” migrant camp in the northern port town of Calais — from where the migrants try and sneak into Britain — that left 40 people injured.

A female aid worker was among those seriously hurt after the fight broke out between some 200 Afghans and Sudanese on Thursday. The brawl began as food was being distributed and one person was stabbed.

Last year, some 1.3 million refugees, mostly from conflict-ridden Syria and Iraq, asked for asylum in the European Union — more than a third of them in Germany.