UK – (warsoor)  – Prime Minister David Cameron is to step down by October after the UK voted to leave the European Union.

Speaking outside 10 Downing Street, he said “fresh leadership” was needed.

The PM had urged the country to vote Remain but was defeated by 52% to 48% despite London, Scotland and Northern Ireland backing staying in.

UKIP leader Nigel Farage hailed it as the UK’s “independence day”, while Boris Johnson said the result would not mean “pulling up the drawbridge”.

Scottish First Minister Nicola Sturgeon said she was “absolutely determined” to keep Scotland in the EU so a second Scottish independence referendum was now “highly likely”.

German chancellor Angela Merkel expressed “great regret” at the outcome, and EU chiefs said they expected the UK to begin negotiations to leave “as soon as possible, however painful that process may be”.

Flanked by his wife Samantha, Mr Cameron announced shortly after 08:15 BST that he had informed the Queen of his decision to remain in place for the short term and to then hand over to a new prime minister by the time of the Conservative conference in October. 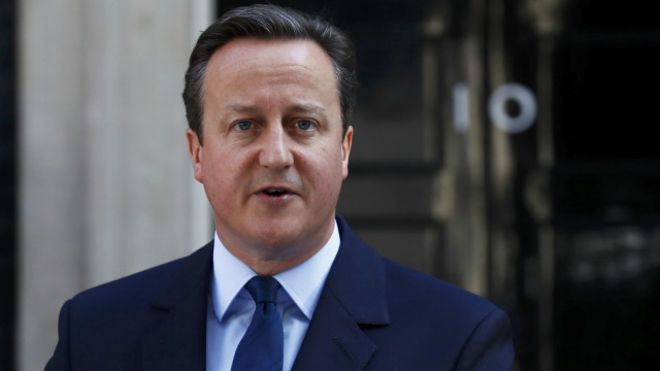