USA – (warsoor) – The United States called for tougher sanctions against North Korea after it test-fired a ballistic missile Sunday in an apparent attempt to test the South’s new liberal president and the US administration of Donald Trump.

“Let this latest provocation serve as a call for all nations to implement far stronger sanctions against North Korea,” the White House said in a brief statement.

The missile flew more than 700 kilometers (435 miles) before landing in the Sea of Japan (East Sea).

It impacted “so close to Russian soil … the president cannot imagine that Russia is pleased,” the White House said, adding that North Korea “has been a flagrant menace for far too long.” 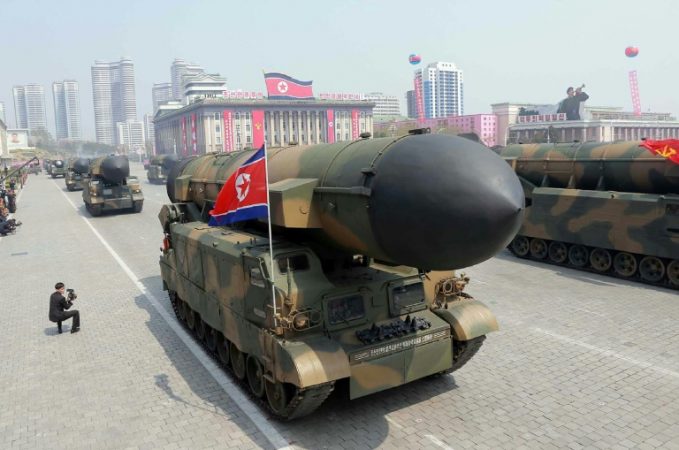 Russia’s defense ministry later said the missile landed about 500 kilometers from its border and posed no threat.

The United States and Japan called for an emergency meeting of the United Nations Security Council, and a meeting has been scheduled for Tuesday afternoon, according to the UN mission of Uruguay, which currently holds the council’s presidency.

China, which has been under growing US pressure to help rein in nuclear-armed North, urged restraint.

“All relevant parties should exercise restraint and refrain from further aggravating tensions in the region,” the foreign ministry said.

Multiple rounds of UN and US sanctions against North Korea have done little to deter Pyongyang from pursuing its nuclear and missile ambitions.

Before the missile test, the US Treasury said it was considering “every tool in our arsenal” to cut off sources of international financing for illegal activities in the North.

Trump has threatened military action and earlier sent a naval strike force toward Korean waters, but recently appears to have softened his stance, saying he would be “honored” to meet leader Kim Jong-Un under the right conditions.

US ambassador to the UN Nikki Haley said Sunday that nothing could justify the hermit state’s latest action.

“This was close to home for Russia. China cant expect dialogue. This threat is real,” Haley said in a tweet.

China, the isolated North’s sole major ally and economic lifeline, has been reluctant to upset the status quo in Pyongyang and risk an influx of refugees from its neighbor.

Haley told ABC News that Kim Jong-Un was “in a state of paranoia.”

South Korean President Moon Jae-In, who was inaugurated only on Wednesday, had been conciliatory. But he slammed the missile test as a “reckless provocation” after holding an emergency meeting with national security advisers.

Moon said Seoul strongly condemned this “grave challenge to the peace and security of the Korean peninsula and the international community”, according to his spokesman Yoon Young-Chan.

Moon, unlike his conservative predecessors, advocates reconciliation with Pyongyang. He had said he was willing “in the right circumstances” to visit the North to ease tensions. But he warned Sunday that dialogue would be possible “only if the North changes its attitude.”

The North itself would be willing to hold talks with the US if conditions were right, Choe Son-Hui, a senior official in the North’s foreign ministry, said Saturday.

“The North is apparently trying to test Moon and see how his North Korea policy as well as policy coordination between the South and the US will take shape,” said Yang Moo-Jin, professor at the University of North Korea Studies in Seoul.

The launch was also aimed at “maximizing the North’s political leverage” ahead of possible negotiations with the US, he added.

“The North wants to show before negotiations that their precious, powerful weapon is not something they would give up so easily,” Yang said.

The missile test is likely to embarrass Beijing, which was hosting an international summit Sunday to promote its ambitious global trade infrastructure project.

Russian President Vladimir Putin and his Chinese counterpart Xi Jinping discussed the Korean situation on the sidelines of the meeting and “both parties expressed their concern over the escalation of tensions,” Kremlin spokesman Dmitry Peskov told reporters.

The European Union and NATO meanwhile said the test launch constituted a threat to international peace and security.

The latest test was the North’s first launch since a controversial US missile defense system deployed in the South became operational on May 2. It follows a failed April 29 ballistic missile test by Pyongyang.

The North has staged two atomic tests and dozens of missile launches since the start of last year in its quest to develop an intercontinental ballistic missile (ICBM) capable of delivering a nuclear warhead to the US mainland.

The US Pacific Command said Sunday’s launch did not appear to be an ICBM.

Yang said, however, that it showed “fast progress” in Pyongyang’s missile capability.

The missile was fired from a site near the northwestern city of Kusong. A test from the same site in February sent a missile 500 kilometers, far less than Sunday’s launch.