Turkey – (warsoor) – Turkey on Wednesday slammed as unacceptable a US plan to arm Syrian Kurdish fighters whom Ankara considers terrorists, but the militia applauded a “historic” move that would hasten the extremists’ defeat.

The issue risks further stoking tensions between Ankara and Washington less than a week before President Recep Tayyip Erdogan heads to Washington to meet his US counterpart Donald Trump in their first face-to-face encounter as heads of state.

The Kurdish Peoples’ Protection Units (YPG) is seen by Washington as the best ally against Islamic State (IS) jihadists in Syria and the prime attacking force in any assault on their stronghold of Raqa.

But Ankara regards it as a terror group and the Syrian branch of the Kurdistan Workers’ Party (PKK), which since 1984 has waged an insurgency inside Turkey leaving tens of thousands dead. 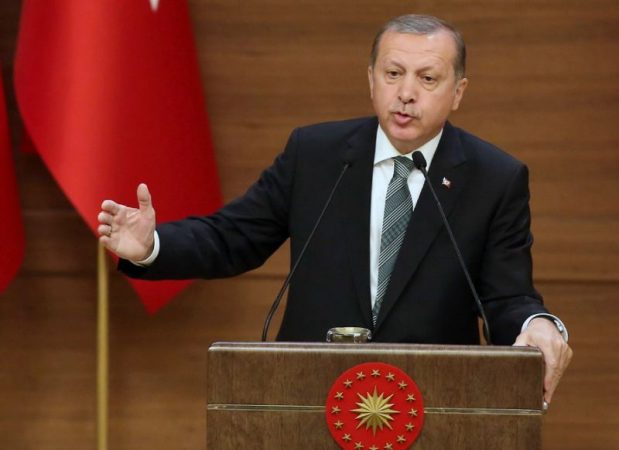 The dispute poisoned ties between Turkey and the United States under the administration of former president Barack Obama but Ankara had hoped for smoother ties under Trump.

“The supply of arms to the YPG is unacceptable,” Deputy Prime Minister Nurettin Canikli told A Haber television.

“Such a policy will benefit nobody,” he said. “We expect that this mistake is to be rectified.”

Turkish Foreign Minister Mevlut Cavusoglu added that “every weapon that turns up in their hands is a threat directed toward Turkey”.

In a surprise announcement, the Pentagon said Trump had authorised the arming of Kurdish fighters within the Syrian Democratic Forces (SDF) “to ensure a clear victory over ISIS in Raqa.”

The YPG hailed the move as “historic” and said it would now play “a more influential, powerful, and decisive role” in fighting IS.

YPG spokesman Redur Xelil described the move as “somewhat late,” but would still “provide a strong impetus” to all forces fighting IS.

The SDF, a US-backed group dominated by YPG but which also contains Arab elements, said that receiving US arms and military equipment would “hasten the defeat” of the jihadists.

It remains to be seen what shadow the issue will cast over the talks between Trump and Erdogan, which have been touted as chance to forge a new partnership between the two NATO allies.

A high-level Turkish delegation including Chief of Staff General Hulusi Akar, presidential spokesman Ibrahim Kalin and Turkey’s spy chief Hakan Fidan had been in the US laying the groundwork for the meeting.

Canikli said Turkey would take the diplomatic initiative to convince Washington “to do what friendship requires”.

“The argument that a ground operation in the fight against Daesh (IS) would be successful only with YPG has nothing to do with reality,” he said.

Both Washington and Brussels classify the PKK as a terror group but do not regard the YPG as such.

“YPG and PKK are both terror groups, there is no difference at all between them. They only have different names,” Cavusoglu said in televised comments during an official visit to Montenegro.

Last month, Erdogan said if Turkey and the United States joined forces, they could turn Raqa into a “graveyard” for jihadists.

But on April 27, Turkish warplanes struck YPG forces in Syria and also hit Kurdish forces in neighbouring Iraq in what Ankara described as “terrorist havens”.

But the strikes angered Washington which accused Turkey of failing to properly coordinate its moves.

Pentagon chief Jim Mattis on Tuesday took part in a summit in Copenhagen for senior leaders from the top 15 countries in the anti-IS coalition, including Turkey.

Mattis, who was in Vilnius on Wednesday as part of a European tour, gave a positive assessment of the role Turkey will play in the lead up to the Raqa fight.

“Our intent is to work with the Turks, alongside one another to take Raqa down,” he said.

Meanwhile, Trump was to receive Russia’s top diplomat Sergei Lavrov at the White House on Wednesday to discuss a Russian plan to establish safe zones in Syria and help end the six-year conflict.

Russia — the key ally of Syrian President Bashar al-Assad — and Turkey have been on opposite sides of the Syrian conflict but are working increasingly closely together in search of peace.