On 18 May 2016, Somalilanders everywhere are marking the 25th anniversary of the re-assertion of the independence of the State of Somaliland, now called the Republic of Somaliland, and are busy strengthening their peaceful, democratic state in a region where both peace and democracy remain elusive. The warning that liberty may be acquired, but is never recovered if it is once lost resonates with Somalilanders who on acquiring their independence from Great Britain on 26 June 1960 gave it up hastily for an unattainable dream of building a union of all the five territories inhabited by ethnic Somalis in the Horn of Africa. They re-acquired their lost independence, only at a considerable cost, on 18 May 1991.  That lesson that has been well and truly learnt and Somaliland’s independence and sovereignty will never be compromised again. 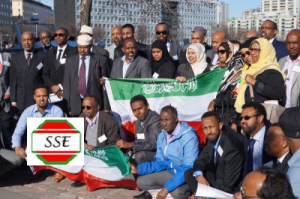 In addition to the  two dates mentioned above, there is another less well known date that  marks the beginning of the distinct Somaliland national identity. This was the formal declaration of the colonial state, the British Somaliland Protectorate, on 20 July 1887. Like in many other African, Arabian and Asian countries  which were created by the European colonial powers in the latter half of the 19th century or the beginning of the 20th century as new colonised ‘states’ or territories with international borders respected to date, the distinct national identity of  Somaliland now spans three centuries.   We explained that national identity in more detail in our SSE Statement of 30 October 2014.

Whilst we will all be also celebrating next month on 26 June (Independence Day) the birth of the independent State of Somaliland, 18 May (Re-acquisition Day)  involves  not only celebrations, but also commemoration and remembrance of the atrocities, mass killings and  the destruction of all the main towns by the armed forces of the then Government Somali Democratic Republic, which was neither democratic nor a Republic.  These planned and systematically executed acts marked the end of the hasty 1960 union of the two states of Somaliland and Somalia – a union whose central plank of democracy enshrined in its Acts  of Union and constitution were all already torn up by a Military dictatorship in 1969. In turn when,  in January 1991, the Somali Democratic Republic state collapsed, a few individuals in Mogadishu crowned themselves as rulers, thereby jettisoning the 1979 Constitution, as well.  Somaliland’s reassertion of its independence on 18 May 1991 was, as confirmed by  the ICJ, not contrary to international law, and neither was there any longer, any semblance of an existing constitutional  order.  The state that disappeared was neither governed democratically, nor respected human rights and it beggars belief that its remnants and other claimants and pretenders that came after it were allowed to claim non-existent ‘territorial integrity’  over territories that they have never controlled.

Somaliland and Somalia are different

Two independent countries called Somaliland and Somalia united in July 1960 and not two regions, as sometimes portrayed in the Somalian press. As was repeatedly pointed out by the late President Egal, Somaliland, even during its ‘union’ with Somalia, was never part of a country called SOMALIA. Both the Acts of the Union and the 1960 Constitution confirmed that following their union the new state shall be called  the SOMALI REPUBLIC. There was no discussion anywhere or agreement that the name of one or the other of the two states that united (i.e Somaliland and Somalia) should continue to be used. Indeed both of the names were colonial constructs  as the suffix ‘land’ (of  Germanic origin) and ‘ia’ for new states (and ‘stan’ in others) are used world-wide in numerous countries with different languages from Finland to Nigeria,  and neither is any more or less Somali than the other. Yet Somalians continued to refer to the ‘united’ state as ‘Somalia’, an attitude that very much represented the lopsided nature of the union in so many different issues.

Since 1991, it is of course, up to the Somalians what they call their country/state, and we note that both their 2004 Charter and their 2012 Interim Constitution refer to their country as the Federal Republic of Somalia. Despite the Somalian claims, the reality which the world is aware of is that Somaliland has never been party to the various Somalia conferences held since 1991 and to the various political dispensations for Somalia that started in 2000 onwards and are still ongoing, with the latest ones being for this year and, as recently announced also for the year 2020. Somaliland has its own constitution and government elected in popular elections.

It is common ethnicity evidenced by, among other things, common language and culture etc. (and common religion) that all the Somali people who inhabit the five territories of the Horn shared, but there was never one a single state they for all shared.  Today ethnic Somali leaders in the capitals of three of these territories (Hargeisa, Jigjiga and Djibouti), which are only a few hundred miles of each other,  share no common nationality or national origin but  meet co-operatively about the common affairs  of their three countries and often also meet ethnic Somali ministers and members of the Parliament of Kenya.  However, the continuing fatuous Somalian claim over Somaliland makes any similar very close co-operation and joint working impossible. One only needs to look across the Gulf of Aden to see examples of ethnic Arab small and large states, some of whom with past common governmental structures at various times, co-operating side by side by side in peace and mutual support.

An amicable parting or another costly war?

In this third decade since the end of the defunct union between Somaliland and Somalia, we repeat again our previous plea and warning. We saw in Europe in 2014 how one of the oldest democracies, the United Kingdom, had contemplated the end of the prosperous and peaceful 300 year old union of England (population then 54.3 million) and Scotland (population then 5.3)  through the exercise of self-determination by the people of Scotland.  We mention this again because, in the case of Somaliland and Somalia, there has actually been no union at all for not only the last 25 years but also for the preceding 6 or so years when there was what was described ‘a government at war with its own people’.  Our underlying message is that it is imperative that the  defunct union is laid to rest peacefully to avoid another costly war.

Many new countries in Europe and elsewhere have joined the international community since 1991 and it appears that Somaliland’s location in Africa and its misfortune to have been once part of the one of the most drastic state failures have overshadowed its unique (sui generis) case as highlighted in the conclusions of the African Mission to Somaliland in 2005. For decades, the international community has been, understandably, preoccupied with re-establishing peace and governance in Somalia and has repeatedly failed to address the status of Somaliland properly.

The spurious claims about Somaliland made by various changing faces in Somalia ranging from the warlords of yesteryears to various appointed persons that followed have so far been accepted, without any questioning.  It is incredible that in spite of the fact that Somaliland leaders, parliamentarians and local councillors elected in popular elections governing the country, the Somalian authorities in Mogadishu often portray individuals of Somaliland origin who represent no one but themselves as representing Somaliland in Somalia.  These practices which are sold to the international community fool no one and are disingenuous and fraudulent. We ought to be all concerned about the messages that these dubious practices and the continuing disregard of the Somaliland people’s exercise of their right to self-determination 25 years ago  send to the vast majority of the Somaliland population who are aged under 30 years.