Toshiba – (warsoor) – Faced with the prospect of a multi-billion-dollar writedown that could wipe out its shareholders’ equity, Japan’s Toshiba is running out of fixes: it is burning cash, cannot issue shares and has few easy assets left to sell.

The Tokyo-based conglomerate, which is still recovering from a $1.3 billion accounting scandal in 2015, dismayed investors and lenders again this week by announcing that cost overruns at a U.S. nuclear business bought only last year meant it could now face a crippling charge against profit.

Toshiba says it will be weeks before it can give a final number, but a writedown of the scale expected – as much as 500 billion yen ($4.3 billion), according to one source close to Toshiba – would leave the group scrambling to plug the financial hole and keep up hefty investments in the competitive memory chip industry, which generates the bulk of its operating profit. 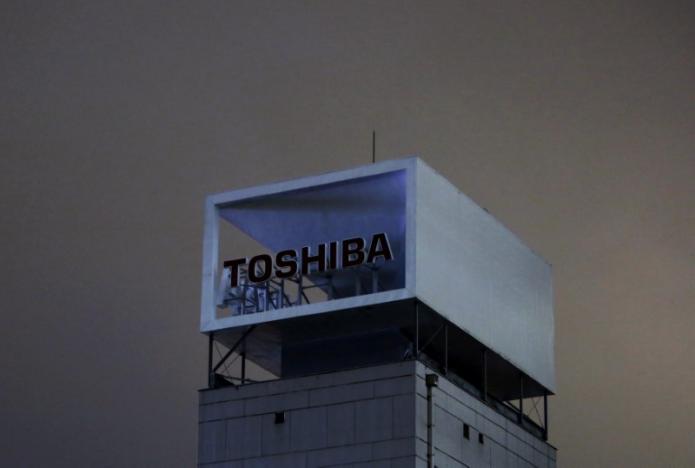 Shareholder equity, which represents its accumulated reserves, stood at 363.2 billion yen at the end of September, already just 7.5 percent of total assets.

Toshiba cannot raise cash by issuing shares because of restrictions imposed by the stock exchange after last year’s scandal. One source close to the matter said Toshiba had been considering a share issue of around 300 billion yen, but the imminent lifting of those restrictions are now unlikely.

Private equity funding could be an option, but financial sources and investors said Toshiba would likely be forced to sell off more assets and stakes, months after having sold its two most easily marketable businesses: white goods and medical devices.

“Toshiba’s immediate problem is that it is burning cash at an alarming rate, and this will be more than challenging,” said Ken Courtis, chairman of Starfort Investment Holdings.

“I see little option but to sell a slew of non-core assets.”

Its loss-making PC and TV businesses would be poor candidates for sale, while its many cross-shareholdings are unlikely to fetch enough.

“It has mostly sold assets which have big price tags or that could easily find buyers already. It would be difficult to secure big funds through asset sales.”

One source in the semiconductor industry said Toshiba could revive plans to list a slice of the memory chip business, which though highly profitable burns through cash for reinvestment.

“Toshiba will probably need to sell 30-40 percent of the NAND business in an IPO to secure enough cash,” the source said, adding China’s aggressive drive into NAND flash memory chips could make the timing reasonable.

The group has already said it could reconsider the “positioning” of its nuclear business, deemed core last year, and has signaled it could trim an 87 percent stake.

Toshiba has said it will consider a capital strategy, but has given no details.

For now, creditor banks are expected to step into the liquidity breach, betting on Toshiba’s growing chips business – though they were blindsided by the news and expressed concerns over continued governance and disclosure issues.

Some bankers had been on a factory tour with Toshiba on the day before the announcement, two of the banking sources said. They were told about the writedown that night.

“We really need a proper explanation of how, and to what extent, President Tsunakawa came to know of this,” said an executive at one of Toshiba’s regular bankers.

“It just defies common sense that this would come out only now about a deal done a year ago.”

Bankers and analysts said the latest shock should at least push Toshiba to resolve long-standing headaches like its poor disclosure and governance, and could force it to offload some cross-shareholdings.

One Toshiba shareholder estimated that the book value of all its cross-shareholdings would be about $3.2 billion, and it could get more than that based on past experience.

Sale options would include its roughly 50 percent stakes in Toshiba Plant Systems and Services and Toshiba Tec (6588.T), both worth around $670 million at current market prices, according to Thomson Reuters data.

“If the company wants to survive, it needs to go through a ‘scrap-and-build’ process,” said Norihiro Fujito, senior investment strategist at Mitsubishi UFJ Morgan Stanley Securities.

“Right now, even if banks are assisting, it’s like they are throwing their money down the drain.”