RIYADH – (warsoor) – A work force of 17,000 security men besides 3,000 modern vehicles have been mobilized to provide utmost safety to pilgrims.

At a press conference held in Makkah, Civil Defense Commander for Haj Maj. Gen. Hamad bin Abdulaziz Al-Mubaddal said that plans and preparations of the Civil Defense Directorate are in full gear to confront emergencies as well as contingencies during this year’s Haj season, to guarantee utmost safety of the pilgrims in Makkah and Madinah. He added that as many as 35 governmental bodies are actively taking part in the master plan set by Civil Defense. 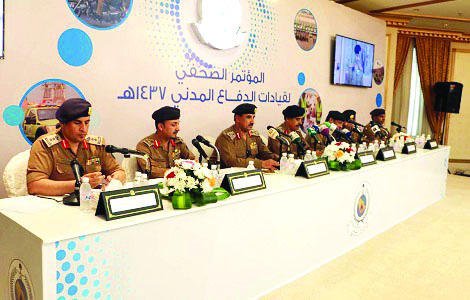 Last week, the General Department of Civil Defense in Makkah practiced a drill for evacuation, firefighting and control at the Security Forces Hospital in Makkah.

The exercise came as part of the on-the-job training program in preparation for the Haj season.

Makkah Civil Defense’s official spokesman, Maj. Nayef Al-Sharif, said the drill began by receiving a tip at the National Center for Joint Security Operations, reporting that a fire broke out in a room on the 4th floor of the hospital’s four-story building, adding that the necessary units were immediately moved to the site, and rescuers began evacuation operations, while firefighting units stormed the site and controlled the fire.

Maj. Al-Sharif said that a meeting was held at the end of the drill between the director of Makkah Civil Defense Department and the relevant authorities partaking in the exercise, in which they discussed the main obstacles and ways to address them, besides emphasizing the importance of safety means, and the training of specialists in safety work.

In a separate press conference held in Mina, Haj Security Forces Commander Lt. General Khalid bin Qarar Al-Harbi said the government of Custodian of the Two Holy Mosques King Salman, Crown Prince Muhammed Bin Naif, deputy premier and minister of interior, and Deputy Crown Prince Mohammed Bin Salman, second deputy premier and minister of defense, has exerted extensive efforts in all sectors to ensure the safety and security of the pilgrimage, and to ensure success of this year’s Haj.

Al-Harbi added that on the directives of Crown Prince Mohammed bin Naif, deputy premier and minister of interior, issued at the end of last year, a number of committees to review the pros and cons of all Haj-related work were convened, including for the execution of a number of developmental projects in the holy cities of Makkah and Madinah.

The commander noted that a number of workshops were conducted among officials who are dealing with pilgrims and their needs.

Al-Harbi said the security plan was implemented early this month in security centers in the holy city of Makkah.