Barawe – (warsoor) – The Chief of Defence Forces of the Uganda Peoples Defence Forces (UPDF), Gen. Katumba Wamala inspected defence positions of the African Union Mission in Somalia (AMISOM) in Barawe and Qoryoole, in Lower Shabelle region on Wednesday, on the final stage of his three day working visit to Somalia.

In the port city of Barawe, Gen. Katumba interacted with the ground forces of the Somali National Army (SNA) and AMISOM troops under Ugandan contingent. He also visited a forward operating base along Kismayo Road in the outskirts of the city.

Barawe was liberated by SNA and AMISOM from Al-Shabaab in October 2014.

I came to see how they are settling in and how their defence positions are,” said Gen. Wamala, shortly after addressing the newly deployed troops. 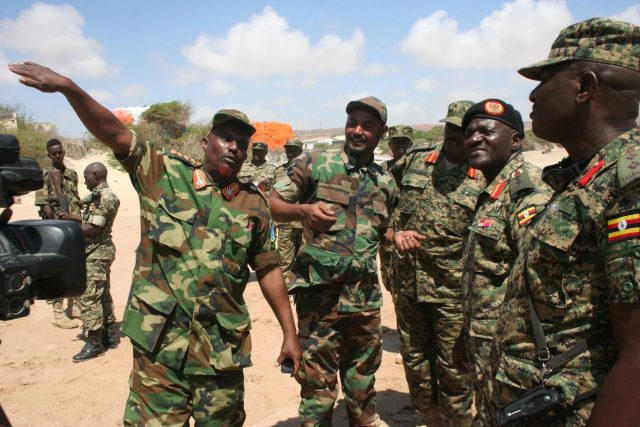 “ I took advantage of my visit here to check out the defences and how they are,” explained the army chief.

While addressing the SNA soldiers, Gen. Katumba encouraged the troops to prepare to take charge of the country’s security when AMISOM eventually exits Somalia and transfers the responsibility of securing Somalia to the national forces.