Skip to content
Health
10 – Shona people: They are a tribe part of Bantu and a very powerful tribe known for establishing the Zimbabwe Empire that once dominated southern Africa and forced the Swahilis to submit a tribute to the great Shona rulers.
9 – Fulani people: They are the largest nomadic tribe in West Africa who are traditionally herders and traders that are scattered in 5 countries such as Nigeria, Guinea, Mali, Burkina Faso and Niger. They are militarily known for being fierce nomadic warriors that subjected and enslaved their fellow West Africans.
8 – Massai People: They are famously known for being fierce warriors and herders that dominated plains of Kenya and Tanzania. They even fight and hunt down lions showing off their strength.
7 – Mali people: They are famously known for establishing the most powerful Empire in West Africa and with its powerful military capability they were able to colonize many tribes in West Africa. Forcing the North African Berbers to submit tribute and successfully resisting the Portuguese incursion.
6 – Oromo people: They are the largest tribe in East Africa famously known for their brutal expansion in the Horn of Africa during the 16th century where they were able to conquer vast fertile lands for their growing population and the land they’ve gained is some of the best in the region. They are militarily known for crumbling the Abyssinian Kingdom and replacing it with Yejju Dynasty. They also contributed most of the Ethiopian resistance against the Italians and Egyptians.
5 – Berbers: Strong scattered tribes ranging from Libya, Tunisia, Algeria, Morroco and western Sahara. They were militarily known for conquering Spain, successfully resisting the ancient Persian colonizers and defeating the Roman Empire at the start. They are also known for dominating the Mediterranean sea and conquering many West African kingdoms where they converted a large population to Islam. 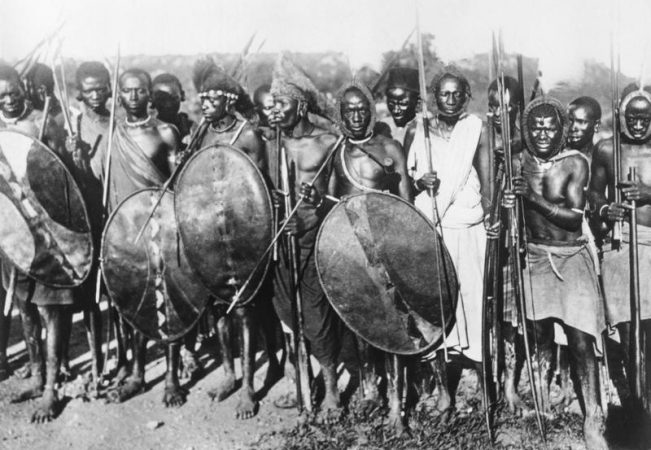 4 – Zulu people: Of course they are the most famous tribe by far for their fighting capability. They are the largest tribe in southern Africa and known to be a mighty fighting tribe that gave Britain a run for their money despite the fact not having advance weapons shows you truly how strong Zulus would be with their advanced weapons.
3 – Abyssinian people: They are politically and culturally a dominated group in Ethiopia and Eritrea. They are the lingua franca of both countries. Their military history dates back to the Axum period where they conquered and colonized the southern Arabians. They are a powerful mountainous people and with their perfect terrain, they were able to resist most invasions successfully and have a long history of their successful warfare skills.
2 – Nubian people: Probably the most unrated tribe on the list. They are famously known for establishing the Kush Kingdom which was the longest lasted Kingdom in Africa. The Kush Kingdom successfully resisted all foreign invaders from the middle east to Europe and successfully conquered and ruled the Egyptian Empire. They also defeated and resisted the Arab caliphate and eventually converted to Islam in peace.
1- Somali people: They are undisputedly the most powerful African tribe there can ever be. Their military warfare skills and tactics are some of the best in the continent and oldest dating back to the Land of Punt where they sent their powerful mercenaries to Egypt defeating the ancient Hittites. They occupy the largest territories in Africa scattered in 4 countries such as Somalia, Ethiopia, Kenya and Djibouti. They are extremely fierce herders and great traders having the richest maritime culture & history in Africa. They were the first Africans to conduct in a naval warfare especially against a European superpower like the Portuguese Empire in the medieval times defeating them in a naval combat during the Ajuran-Portuguese wars and successfully resisting the Oromo expansion where they conquered their territories and forced Islam upon them. They were the first Africans to acquire modern weapons during the medieval period with their powerful Somali commander called Ahmed Gurrey who conquered and colonized Abyssinia for 14 years. They’ve established the most powerful kingdom known as the Ajuran Empire in the medieval times that established the most colonies in the entire African history across Africa to the Indian ocean and equally dominated the Indian ocean trade. They’ve conducted naval expedition as far as Southeast Asia exercising its power. They are the oldest Muslims in Africa and largest Muslims in East Africa and famously known for spreading Islam across Africa through trade or by brute force. They’ve historically forced many powerful Arab rulers to submit tribute in the most embarrassing manner and at the same time sacking many wealthy Arab ports. They are also historically the most brutal slave owners in Africa where they would establish slave colonies or raid local Bantus and Nilotic subject.

Biden signs raft of orders, including to rejoin Paris climate accord

Joe Biden holds memorial for 400,000 Americans who have died of Covid-19

Biden signs raft of orders, including to rejoin Paris climate accord

U.S.A – (WARSOOR) – US President Joe Biden signed a series of executive orders to launch his administration Wednesday, including a decision to rejoin the Paris climate accord and a…