Mogadishu – (warsoor) – The Somali Federal Parliament has today on Wednesday given vote of confidence to the new Ministers in which the Somali Prime Minister, H.E. Hassan Ali Khayre appointed in recent, SONNA reported.

241 Members of the Somali Federal Parliament attended today’s session and the Somali Premier, Khayre was allowed to present his program of his government for upcoming four years term after taking a vote to his program into Parliament’s agenda or not, but accepted. 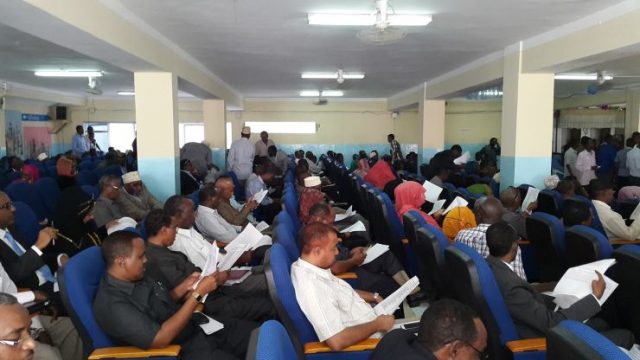 “224 lawmakers voted yes, 15 others rejected and 2 others were silent and the new Ministers are approved, Chairperson of the Supreme Court will pass them the oath and we will then welcome the Prime Minister and Acting president and Speaker to deliver speeches here”, Mr. Mudey said.

Somali Premier, Hassan Ali Khayre thanked legislators for passing the cabinet and promised that he would more accountable with them on their duties.

“The Security and handling drought crisis in the country will be our main priority”, Mr. Khayre said.

Former BBC-Somali Service journalist, Yusuf Hassan said that giving confidence to the new government today has disappeared rumors that the Parliament would reject to pass the new cabinet.

Send your views to Cobrasonna@gmail.com