Shane Long and Mane scored just minutes apart to hand the hosts a two-goal lead, but Kelechi Iheanacho pulled one back for City just before half-time. Mane struck again after the break to restore the lead and completed his hat-trick a few minutes later, and Iheanacho’s second goal came too late to influence the outcome of the match.

Unsurprisingly, the Citizens gave some of their top stars a rest with an eye on the UEFA Champions League clash with Real Madrid in midweek. As shared by the club’s official Twitter account, Sergio Aguero, Kevin De Bruyne and Vincent Kompany all missed out on a spot in the starting XI: 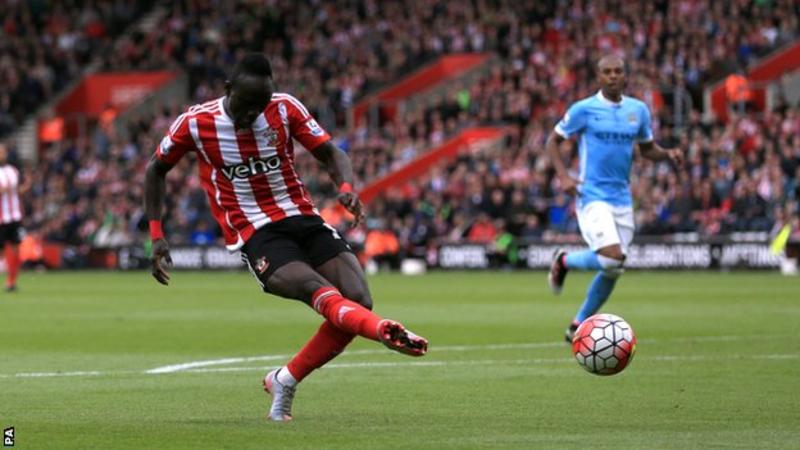 Southampton came into this match with plenty still to play for, as UEFA Europa League qualification is still possible for the Saints, and the hosts took control of the ball early.

Mane tried his luck with an early shot from just outside the box, but it barely troubled Joe Hart. City kept most of their players inside their own half, and Southampton looked comfortable in possession, even if chances were few in the first 10 minutes.

Mane and Jordy Clasie were the main danger men for the hosts, but the former should have picked out the latter after a lovely move instead of going for glory and missing the target completely.

Meanwhile, Dusan Tadic was winning just about every battle every time he split out wide, and he nearly found Long with an inviting cross, only to be denied by Eliaquim Mangala. Bleacher Report’s Sam Tighe liked what he saw from Tadic:

Long hit the side-netting just a few minutes later, before Fraser Forster was forced into making his first real save of the afternoon to deny Raheem Sterling from close range.

Saints continued to be the better team, however, and they were finally rewarded after 25 minutes. Tadic laid it off to Long, who beat Nicolas Otamendi for pace and pushed the ball through Hart’s legs to hand his side the lead.

Per Squawka Football, Long hit a personal mark with the goal:

The hosts were firing on all cylinders at this point, and three minutes later, they struck again. It was Mane who provided the finishing touch this time around, running the length of the field to get in position to receive Tadic’s through ball.

Cuco Martina almost handed Clasie the third goal on a platter, but the Dutchman’s chip took a slight deflection and fell inches wide of the target for a corner kick. Jose Miguel Fonte also went close, firing a header wide.

Southampton were all over City, and a third goal seemed inevitable, but instead, the Citizens pulled one back before half-time. Martina was surprised by Samir Nasri’s ball into the box and could only push his clearance as far as Iheanacho, who gave the visiting fans some hope with a lovely finish.

Southampton started the second half on the front foot, but the first chance of the half fell to the visitors, as Iheanacho fired a shot straight at Forster.

Saints continued to dominate possession, but they found it harder to muster major chances after the break. City didn’t fare much better, but they occasionally threatened on the counter-attack, and Virgil van Dijk had to make a handful of strong clearances.

As the second half wore on, City started seeing more and more of the ball, but a scrappy goal restored the two-goal lead for Saints after 57 minutes. Van Dijk powered a header off the bar, and Fonte couldn’t quite push the rebound into the net, but Mane was there to convert the chance for his second goal of the match.

Per Squawka, the forward has been remarkably efficient of late:

ity manager Manuel Pellegrini introduced Jesus Navas and Martin Demichelis to turn the tide, shifting to what appeared to be a three-man back line.

It hardly helped, however, as Mane completed his hat-trick shortly after, once again using his pace to beat the defenders before converting at the near post.

Per MisterChip English, Hart hadn’t conceded a hat-trick in some time:

Iheanacho bagged his second goal of the match a few minutes later, but it did little to dampen the mood for Southampton fans, who were already celebrating one of their best wins of the season.

There was still time for some late handbags involving Nasri, Martina and Sterling, as frustration took over for the visitors, but the incident didn’t overshadow Saints’ superb performance.

As shared by ESPN FC’s Miguel Delaney, manager Manuel Pellegrini was more than a little disappointed after Sunday’s loss:

His Southampton colleague Ronald Koeman told reporters Saints would have agreed to bring the match forward, but they were never asked:

The win not only increases Southampton’s chances of gaining entry into next year’s Europa League, but it also keeps West Ham United’s top-four hopes alive, with Manchester United also dropping points against Leicester City on Sunday.

City’s next challenge will be the Champions League match against Real, while Southampton will be in action on Sunday against Tottenham Hotspur.