Mogadishu – (warsoor) – The federal republic of Somalia President H.E. Hassan Sheikh Mohamoud has had honor meeting in his presidential palace with the member journalists of NUSOF from the autonomous regions in the country.

At first, President Hassan Sheikh has praised Somali journalist united to NUSOJ umbrella and their historical election held at Mugadishu, says, “I’m really wish to congratulate all of you for the beautiful election that you have selected the new leader on May 17, 2016. This the fruitful changes of Somalia recovering from anyside. You have put a lesson and will deserve to be imitated” 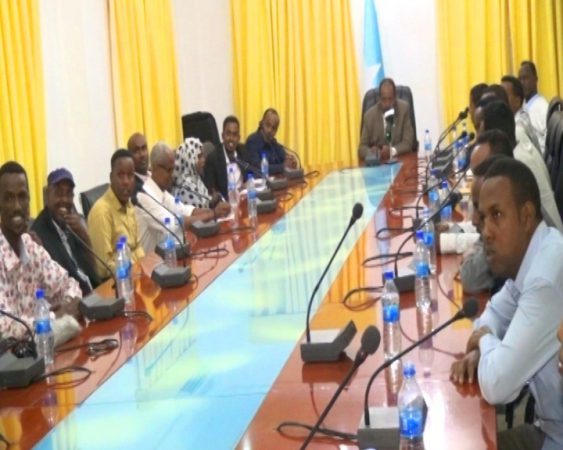 President of Somalia Md. Xasan Sheekh had clearly defined his government decision in reference to Journalists harassments on duty, “We will never accept to and feel bad to intimidate, harass, assault and death threat. You know how much we protect and defend from any enemy. We have capture some journalists’ assailants and put them on trial and executed crimes, and still ready to catch others”.

Somali Journalits umbrella NUSOJ has recently held its annual assembly which elected the news leader who will direct in two terms. This election created too much controversial among journalist revolt which later on resolved veteran journalists eventually.