A U.S. Navy SEAL was killed and two troops wounded in a raid on Friday on an al Shabaab militant compound in what appeared to be the first U.S. combat death in the African country since the 1993 “Black Hawk Down” incident. 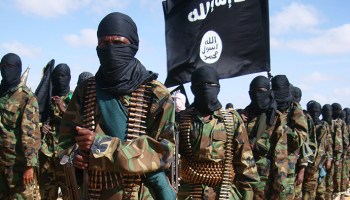 “This will weaken the strength of the terrorists in Lower Shabelle region. It is a victory for the Somali forces and peacemaking.”

The government said the death of the al Shabaab leader “strengthens the war on terror – so fighters have a chance to  leave al Shabaab.”

A spokesman for al Shabaab was not available for immediate comment.

Militants from the al Qaeda-affiliated group al Shabaab have carried out frequent attacks in Mogadishu as they fight to topple Somalia’s Western-backed government and drive out African Union peacekeeping troops.

Somalia has been at war since 1991, when clan-based warlords overthrew dictator Siad Barre and then turned on each other.