The large number of refugees in Kenya had resulted in natural resources, such as water and pasture, becoming scarce in the areas they inhabited, accelerating the threat of conflict in the region.

Kenyatta’s remarks came as delegates from around the world gathered in Nairobi for the United Nations Environment Assembly (UNEA-2) to discuss environmental issues, including the environmental impact of refugees in countries of origin, transit, and reception. 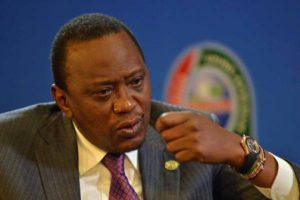 Kenyatta said the process of repatriating the Somali refugees had already started and called on the global community to partner with Kenya to ensure its success.

“The train has already left the station. It’s now up to those who are interested in seeing the success of the journey to come on board,” he said.

Kenyatta was speaking during a courtesy call by UN deputy secretary general Jan Eliasson at State House in Nairobi.

He said Kenya’s action should not be misinterpreted as a move to abandon its international obligations, adding that the country had hosted refugees from neighbouring nations for decades.

He called on all UN member states to support the repatriation of Somali refugees back to their country.

The refugee issue was a shared responsibility and hence the international community had a duty to support Kenya in ensuring that Somali refugees were repatriated in the best way possible.

“We have made a non-permanent situation look permanent,” Kenyatta told Eliasson.

If the problem of Somali refugees was not dealt with now it could create major conflict in future.

“We want Somalia helped to take back its citizens and be able to continue with their lives back home,” he said.

Eliasson commended the Kenyan government for its effort to stabilise the region, especially Somalia and South Sudan.

He said he would communicate Kenya’s position on the repatriation of Somali refugees to the UN High Commissioner for Refugees Filippo Grand, and the UN would partner with Kenya in resolving the refugee issue.