Qatar – (warsoor) – Four Arab states that imposed a boycott on Qatar have issued an ultimatum to Doha to close Al Jazeera television, curb ties with Iran, shut a Turkish base and pay reparations, demands so far reaching it would appear to be hard for Doha to comply.

Saudi Arabia, Egypt, Bahrain and the United Arab Emirates have sent a 13-point list of demands apparently aimed at dismantling their tiny but wealthy neighbor’s two-decade-old interventionist foreign policy which has incensed them. Kuwait is helping mediate the dispute. 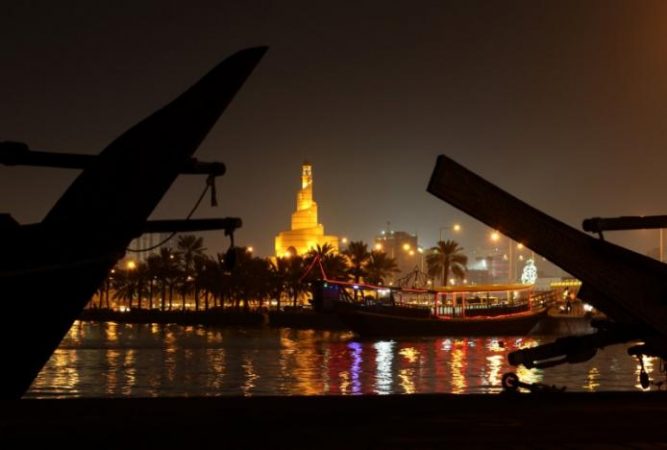 A Qatari government spokesman said Doha was reviewing the list of demands and that a formal response would be made by the foreign ministry and delivered to Kuwait, but added that the demands were not reasonable or actionable.

“This list of demands confirms what Qatar has said from the beginning – the illegal blockade has nothing to do with combating terrorism, it is about limiting Qatar’s sovereignty, and outsourcing our foreign policy,” Sheikh Saif al-Thani director of Qatar’s government communications office, said in a statement.

A Qatar semi-government human rights body said the demands were a violation of human rights conventions and should not be accepted by Qatar.

Foreign Minister Sheikh Mohammed bin Abdulrahman al-Thani had said on Monday that Qatar would not negotiate with the four states until economic, diplomatic and travel ties cut this month were restored.

The countries that imposed the sanctions accuse Qatar of funding terrorism, fomenting regional unrest and drawing too close to their enemy Iran. Qatar rejects those accusations and says it is being punished for straying from its neighbors’ backing for authoritarian hereditary and military rulers.

“The demands are so aggressive that it makes it close to impossible to currently see a resolution of that conflict,” said Olivier Jakob, a strategist at Switzerland-based oil consultancy Petromatrix.

Qatar will reject the demands as a “non-starter”, he said, and its neighbors had already escalated as far as they were likely to go. “Military action remains unlikely at the moment so the outcome after the deadline would be a political stalemate …”

Washington, which is a close military ally of countries on both sides of the dispute, has called for a resolution. U.S. Secretary of State Rex Tillerson said Qatar’s neighbors should make their demands “reasonable and actionable”.

An official from one of the four nations, who gave details of the demands on condition of anonymity, told Reuters the offer would be “void” unless Qatar complied within 10 days.

The UAE has said sanctions could last for years. Qatar, the world’s richest country per capita, says the sanctions amount to a “blockade”, but it has ample reserves to weather the storm.

The dispute is a big test for the United States, which has a large base in Qatar housing the headquarters of its Middle East air power and 11,000 troops.

President Donald Trump has backed the sanctions, even as his Defense and State departments have tried to remain neutral, resulting in mixed signals. Trump called Qatar a “funder of terrorism at a very high level”, only for his Pentagon to approve selling it $12 billion of warplanes five days later.

The most powerful country in the region to back the Qatari side in the dispute has been Turkey, whose President Tayyip Erdogan has his roots in an Islamist political party similar to movements that Qatar has backed in the region. Days after the sanctions were imposed, Turkey rushed through legislation to send more troops to its base in Qatar as a sign of support.

Defence Minister Fikri Isik rejected the demand to close the base, saying it would represent interference in Ankara’s relations with Doha. Instead, Turkey might bolster its presence.

“Strengthening the Turkish base would be a positive step in terms of the Gulf’s security,” he said. “Re-evaluating the base agreement with Qatar is not on our agenda.”

Qatar has used its vast wealth over the past decade to exert influence abroad, backing factions in civil wars and revolts across the Middle East. It infuriated Egypt’s present rulers and Saudi Arabia by backing a Muslim Brotherhood government in Cairo that ruled for a year until it was deposed by the army in 2013.

Qatar’s state-funded satellite broadcaster Al Jazeera became hugely popular across the Middle East, but has long infuriated Arab governments used to exercising firm control over the media in their countries. Jazeera hit back at the closure order, calling it “nothing but an attempt to silence the freedom of expression in the region”.

The demands, handed to Qatar by mediator Kuwait, tell Qatar to stop interfering in the four nations’ domestic and foreign affairs and refrain from giving Qatari nationality to their citizens, the official from one of the sanctioning states said.

They also include severing ties with the Muslim Brotherhood, Islamic State, al Qaeda, Hezbollah, and Jabhat Fateh al Sham, formerly al Qaeda’s branch in Syria, and the surrender of all designated terrorists on Qatari territory. Qatar denies it has relationships with terrorist groups or shelters terrorists.

It was ordered to scale down diplomatic relations with Iran, limit its commercial ties and expel members of Iran’s Revolutionary Guards. Qatar denies they are there.

The sanctioning countries demanded Qatar pay them reparations for any damage or costs incurred due to Qatari policies. Compliance with the demands would be monitored, with monthly reports in the first year, then every three months the next year, then annually for 10 years, the official said.

Although Reuters was told about the contents of the ultimatum by an official from one of the sanctioning countries, UAE Minister of State for Foreign Affairs Anwar Gargash accused Qatar of leaking the demands.

“There is a price for the years of plotting and there is a price to return to the neighborhood,” Gargash said on Twitter. “The leak (of demands) seeks to derail mediation.”

Qataris who spoke to Reuters described the demands as unreasonable, particularly the closure of Jazeera, which millions of Arabs see as an important outlet for voices willing to challenge the region’s authoritarian rulers, but which neighboring governments call a conduit for Islamist propaganda.

Abdullah al-Muhanadi, a retired public sector worker shopping for groceries in Doha on Friday morning, said the boycott must be lifted before negotiations to resolve the dispute could start.

“There’s a lot on the list that is simply not true or unreasonable, so how can we comply?” he said. “There are no IRGC (Iranian Revolutionary Guard Corps) elements in Qatar and the agreement with Turkey is a long-standing diplomatic agreement so we cannot ask them to leave.”

Qatar has only 300,000 citizens enjoying the riches produced by the world’s largest exports of liquefied natural gas. The rest of its 2.7 million people are foreign migrant workers, mostly manual laborers employed on vast construction projects that have crowned the tiny desert peninsula with skyscrapers as well as stadiums for the 2022 soccer world cup.

The sanctions have disrupted its main routes to import goods by land from Saudi Arabia and by sea from big container ships docked in the United Arab Emirates. But it so far has avoided economic collapse by quickly finding alternative routes, and it says its huge financial reserves will meet any challenges.

Qatar says the sanctions have also brought personal hardship for its citizens who live in neighboring countries or have relatives there. The countries that imposed the sanctions gave Qataris two weeks to leave, which expired on Monday.